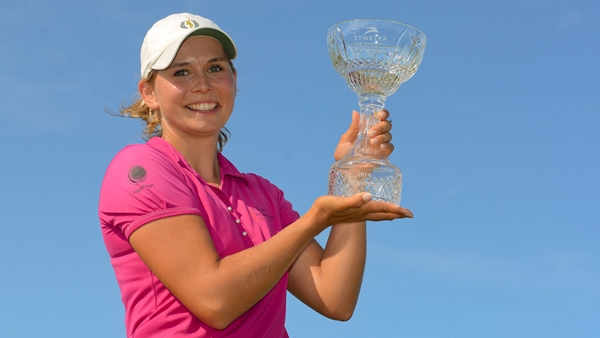 “It’s just a great, great end of the Symetra Tour season,” Engzelius said. “I’m unbelievably happy to stand here with this trophy. I was shaking. I was shaking a lot. The first professional win is big and this is definitely the beginning for me and I’m looking forward to many more.”

Engzelius closed with a 3-under 69 to match Jackie Stoelting and Demi Runas at 10-under 278 on LPGA International’s Jones Course. Stoelting finished with a 64, and Runas shot 65.

Engzelius earned $22,500 to finish 15th on the money list with $36,050. She earned an exemption into the final stage of the LPGA Tour’s qualifying school.

“It’s very important,” Engzelius said. “I knew I didn’t have a chance to get my card this week even though I won, but I knew I had a chance to get straight to final stage and play this course again in December. I will get a couple of months of good practice in and we will see what happens there but maybe I can give myself an opportunity for LPGA next year.”

Runas and Stoelting each made $11,872. Runas jumped from 15th to ninth on the money list to earn an LPGA Tour card, and Stoelting went from seventh to third.

“It’s unbelievable. I don’t think it has set in yet,” said Runas, a former University of California player. “I didn’t know I made it until the girls rushed me and told me after the playoff.”

Marissa Steen, a three-time winner this season, topped the LPGA Tour qualifiers with $75,348. From Westchester, Ohio, the 24-year-old former Memphis player missed the cut in the finale.

“For all the players on the Symetra Tour, the ultimate goal is to finish in the top 10 in order to get full-time status on the LPGA Tour, so to be in that group and to have been in the top 10 the entire year is a dream come true,” Steen said. “My ultimate career goal is to play on the LPGA for a long time, so to know it is going to be happening next year is a great feeling.”

Parks is the first black player to earn an LPGA Tour card through the Symetra Tour. The 24-year-old former Washington player, a two-time winner this year, closed with a 67 to tie for 12th at 6 under.

“It means a lot, but it’s one goal achieved and more goals set for myself for 2015 on the LPGA,” Parks said. “This is going to be a memorable moment, my father is here. I was patient this year. The beginning of the season wasn’t great, but I got back in it with more focus and my coach started travelling with me. I’m looking forward to the first LPGA tournament, but just most importantly I’m looking forward to having fun.”

Veronica Felibert dropped from 10th to 11th, finishing $940 behind Blackwelder for the final spot.

Also narrowly missing out on LPGA Tour cards for next season were Canadians Sara-Muade Juneau, Nicole Vandermade and Maude-Aimee Leblanc.

Leblanc, of Sherbrooke, Que., needed a win this week to retain her full status on the LPGA Tour for next season. She held the lead heading into today’s final round but carded a final round 74 to tie for 4th and finish 19th on the money list.