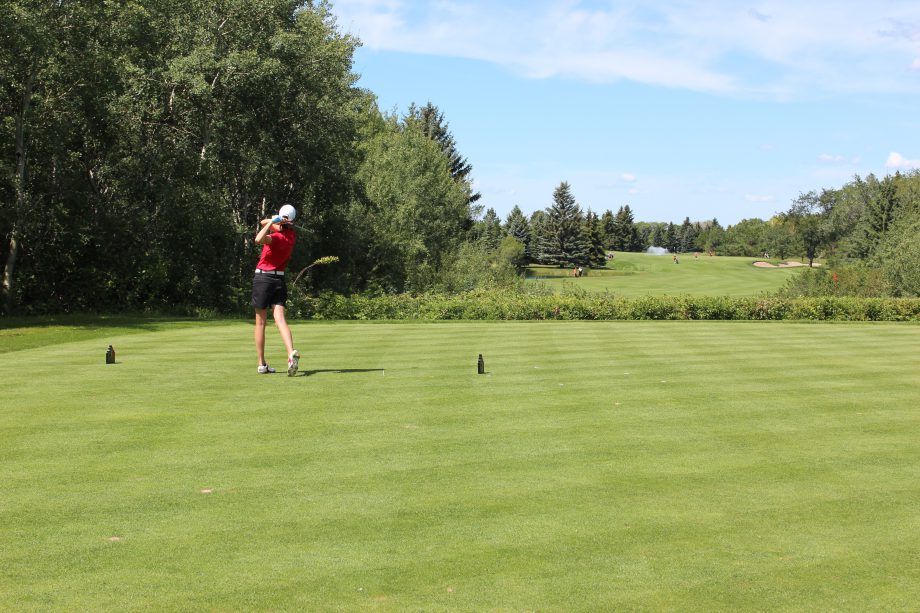 SASKATOON, Sask. – Mariel Galdiano of Pearl City, Hawaii carded a 3-under 69 at Riverside Country Club in Saskatoon, Sask., to take the lead as play began at the 2015 Canadian Women’s Amateur Championship.

After unplayable conditions forced the postponement of the first round, play commenced on Wednesday with sunny skies and high winds. Nearly half of the field completed 36 holes, while the remaining players will tee off Thursday morning prior to the 36-hole cut.

Galdiano, who has yet to play her second round, established a two-shot advantage over her nearest competitor. The 17-year-old, who has one more year of high school remaining, carded four of her six birdies on the front nine. She entered the tournament ranked No. 29 on the World Amateur Golf Rankings, including a T42 finish at the 2015 U.S. Women’s Open. It was her third U.S. Women’s championship after qualifying for her first at 13.

Angleton, Texas native Lakareber Abe tallied seven birdies in her second round en route to a tournament-low score of 5-under 67 to sit in solo second. The 19-year-old’s afternoon-round was highlighted by a bogey-free front nine that featured four birdies. After opening with a round of 76, the University of Alabama product now sits at 1-under for the tournament.

Three players are tied for third and chasing the lead. The No. 5-ranked Bethany Wu of Diamond Bar, Calif., shot 1-over par in her first round. Joining Wu with a score of 73 was Plano, Texas native Dylan Kim. The 18-year-old is ranked No. 37 in the world and placed fourth in this year’s NCAA Women’s Medal Championship playing for Baylor University.  Both Wu and Kim will tee off for their second rounds tomorrow morning.

The remaining player tied at 1-over par is Sarah Burnham of Maple Grove, Minn. The Michigan State Spartan strung together three straight birdies on holes 11 through 13 to register a second round of 3-under par. The 19-year-old carded a 76 during her first round for a total of 145.

Two Canadians are within the Top-15 after their first rounds. Taylor Kim of Surrey, B.C., shot an opening-round 2-over par and sits tied for sixth. Team Canada National Amateur Squad member Maddie Szeryk holds a share of twelfth at 3-over.

The inter-provincial competition coinciding with the first two tournament rounds will conclude on Thursday. Team Alberta is comprised of Team Canada’s Jennifer Ha, National Development Squad member Jaclyn Lee and Sabrine Garrison. The trio of Calgarians are ahead of the competition and sit three-shots clear of Team B.C.

The remaining players needing to play their second rounds will start off the first and tenth tees on Thursday morning, beginning at 7:30 a.m. CST. The top 70 players and ties will make the 36-hole cut and advance to the third round of play on Thursday afternoon.

For full details on tee times and scoring, click here.