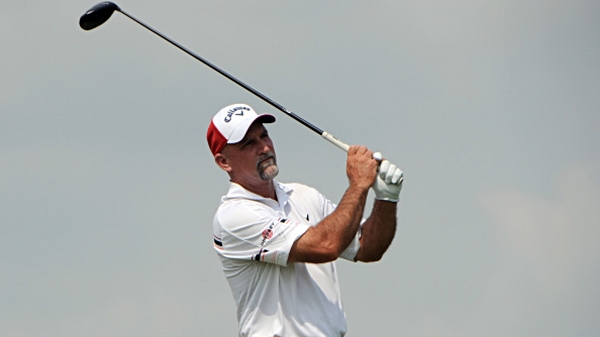 TUCSON, Ariz. – Marco Dawson made a 15-foot par putt on the par-4 18th for a 5-under 67 and the second-round lead Saturday in the Champions Tour’s Tucson Conquistadores Classic.

Dawson had a 10-under 134 total in the first-year event on Tucson National’s Catalina Course, the longtime home of the PGA Tour’s defunct Tucson Open.

Dawson was second last year in the AT&T Championship in San Antonio. He’s winless in 412 PGA Tour starts and has one victory in 161 events on the Web.com Tour.

Wes Short Jr. and Bart Bryant were 9 under. Short eagled the par-5 second hole in a 66. Bryant, coming off a playoff loss to Lee Janzen last month in Naples, Florida, had an eagle on the par-5 10th in his 67.

Jerry Smith, the first-round leader after making a hole-in-one in a 65, dropped three strokes on the final two holes to fall to 8 under. He matched Dawson with a bogey on 17 and made a double bogey after driving into the left-side water on 18.

Bernhard Langer was tied for 10th at 4 under after a 71. He had five victories last year.

Kirk Triplett, the winner of the PGA Tour’s final Tucson Open in 2006 at Tucson National, was tied for 20th at 3 under after a 73.

Jesper Parnevik was 1 over after a 74 in his Champions Tour debut. The five-time PGA Tour winner turned 50 on March 7. He missed the cut two weeks ago in the PGA Tour’s Puerto Rico Open after injuring his back in a fall during a practice round.

Fred Couples was 3 over after a 75. Tom Watson was another shot back after a 72.

Leading the Canadian charge was Rod Spittle. The St. Catharines, Ont., native has a share of 32nd at 1-under.