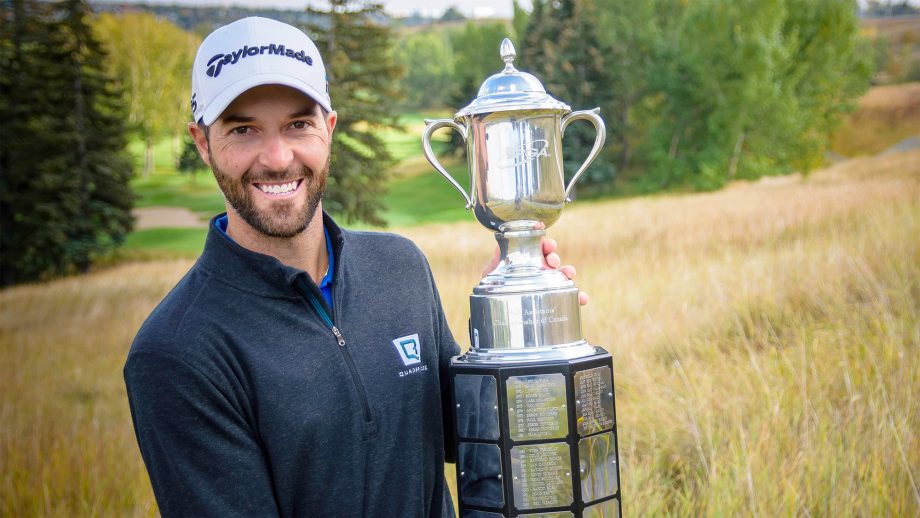 CALGARY – For the second consecutive year, Marc-Etienne Bussieres came roaring from behind to capture the PGA Assistants’ Championship of Canada presented by Callaway Golf.

When the final round at The Winston Golf Club in Calgary began, the 32-year-old from Longchamp, Que., sat four shots off the lead. But by the time the dust had settled after a wild final round featuring impressive scoring from the just about everyone in the field, Bussieres found himself two clear of his nearest competitor.

“I can admit it now, but I was nervous all day long—right from the very first tee shot until I made the birdie putt on the last hole,” Bussieres said. “However, for whatever reason, I usually play my best when I feel the nerves.”

Bussieres’ final round 7-under-65 included seven birdies, five of which came on Winston’s tough back-nine holes.

“All of a sudden I got my groove going on the back nine and the birdies started happening,” he said. “I think it helped that I was playing with Dustin (Risdon) and he was playing so well, that pushed me to make more birdies.”

Bussieres’ three-day total of 199 (65-69-65) saw him two-shots better than Airdrie, Alta’s., Riley Fleming who posted the round of the championship Wednesday, shooting an astounding 9-under-par 63.

“I figured I had to take it really low today to even have a chance,” Riley said after his round. “Unfortunately, I didn’t take it deep enough, but it was still an amazing round with 11 birdies.”

Nearly 40 players finished the national championship at even-par or better.

With the win at The Winston, Bussieres further solidified his position atop the PGA of Canada Player Rankings presented by RBC.

“Being the No. 1-ranked player is always on my mind because of the prestige and the exemption into the RBC Canadian Open,” Bussieres admitted.

Originally launched in 2011, the PGA of Canada Player Rankings presented by RBC has received much praise over the past seven years.
Players ranked inside the top 64 earn invites to the PGA Championship of Canada. The player who is ranked No. 1 at the conclusion of the championship earns an exemption into the RBC Canadian Open.

The Mike Weir Player of the Year Award is also based on points earned throughout the calendar year. Players gain these points based on performance at national and zone tournaments.
Bussieres earned the Mike Weir Player of the Year Award honours in 2016 after capturing the PGA Championship of Canada at Victoria Golf Club. He’s looking to earn the honours again this year.
“It would be a great honour to be named the Mike Weir Player of the Year award winner again that’s for sure,” Bussieres said. “We have our zone event coming up in a couple weeks and I’ve never won it, so I’m pretty excited about my chances because I’m hitting it well and putting well, too.”
The next PGA of Canada national championship takes place Oct. 11-13 at Cabot Links for the RBC PGA Scramble of Canada.
Partner message