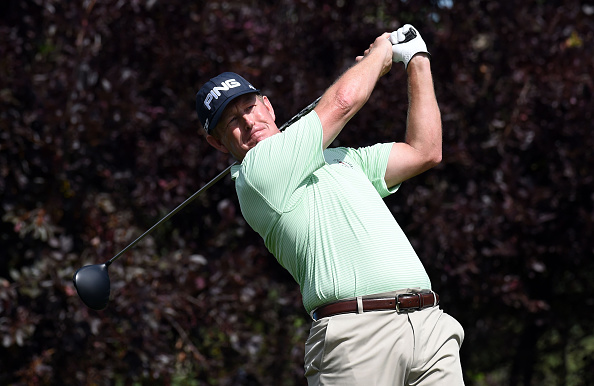 ENDICOTT, N.Y. – Playing with the poise of a champion, Jeff Maggert chalked up yet another win on the Champions Tour.

Maggert won the Dick’s Sporting Goods Open on Sunday for his fourth victory of the year, closing with a 6-under 66 to beat Paul Goydos by two strokes.

Maggert started the final round two shots off the lead and had caught up at the turn after a flurry of five birdies in the first nine holes.

“A great win,” said Maggert, who finished at 14-under 202. “I played just like I wanted to on the front nine, tried to put some distance between me and the rest of the guys and let `em try to catch me.

“Not so many birdies on the back nine, but I kind of hung in there, didn’t make any mistakes and finished it off.”

Maggert won the Regions Tradition in May and the U.S. Senior Open in July, both major championships, and took the Shaw Charity Classic three weeks ago in Canada. Sunday’s victory vaulted him into the lead in the Charles Schwab Cup standings, 119 points ahead of Colin Montgomerie, who skipped the tournament because of commitments in Europe.

The 51-year-old Texan’s second straight 68 on Saturday put him in good position for another triumph, and he took advantage in a big way with six birdies in a bogey-free round. The win was worth $285,000 and boosted Maggert’s earnings for the year to $2,094,976.

Bernhard Langer, the winner last year and third in the Schwab Cup, failed to earn any points. He tied for 20th at 6 under after a 68.

Second-round leader Rod Spittle (74) of Canada, bidding for his second career victory, couldn’t keep the magic going that had placed him atop the leaderboard after rounds of 68 and 66.

Fifty-year-old Scott McCarron (75), who had a 64 on the second round and was tied for second with John Huston to start the day, faltered in his fourth Champions Tour event. He made only two birdies and a triple-bogey 7 at the 15th hole put a damper on his day. Huston finished at 9 under after a closing 72.

As usual, the ninth edition of this tournament came down to the closing holes. Trailing by one shot on a warm, humid afternoon, Goydos hit his tee shot into the large water hazard that lines the left side of the fairway at the difficult par-4 15th hole and had to take a penalty as Maggert paused to watch.

Goydos recovered to make bogey and lose just one shot, then missed a birdie putt inside 8 feet at No. 16 after driving over a cart path to the right of the green.

“That kind of opened a small crack in the door,” Maggert said. “I had a two-shot lead with three (holes) to play. I just tried to finish it off. I was driving the ball well enough to shoot a low score today. I just needed the putter to cooperate. I kind of pulled it all together.”

And Goydos didn’t, especially with his putter. He had 30 putts on each round, negating his strong play off the tee.

“The reality is I just didn’t make enough putts to compete with Jeff,” Goydos said. “I’m not going to look back on this week and say, `Man, that drive at 15 killed me.’ “

Pavin tied Goydos at 12 under with a brilliant pitch for birdie from off the fringe at the par-3 17th. Moments later, the smile on Pavin’s face disappeared when he hit his tee shot into the water hazard at No. 18. He then walked the fairway with head down, frustrated at a lost opportunity.

Maggert stayed out of trouble over the final three holes and was home-free when Goydos missed a birdie putt at No. 18.

Maggert, two shots behind Spittle at the start of play, birdied the first three holes to reach 11 under and added two more before the turn. He chipped to a foot at the par-5 eighth hole and rolled in a 10-foot putt at No. 9.

The surge continued at No. 10 when Maggert rolled in a 40-foot putt to reach 14 under, two shots clear of Goydos.

Goydos, who began the day tied for fourth with Maggert, Woosnam and Stephen Ames, also started with a flurry of five birdies on the front side, but he, too, faltered at No. 7, making bogey. A birdie at the par-5 12th had Goydos back within one of the lead at 13 under.

Now, the Champions Tour takes a three-week break before the final push to the Schwab Cup Championship, and that means more golf for Maggert – with 11-year-old son Jake.

“It’s going to be tough the last five tournaments,” Maggert said. “Those two guys (Montgomerie and Langer) play good every week. This three-week break is going to be good, a little bit of a rest.”

Canadian Stephen Ames shot even-par in the final round to finish at 8-under for a share of 12th place.