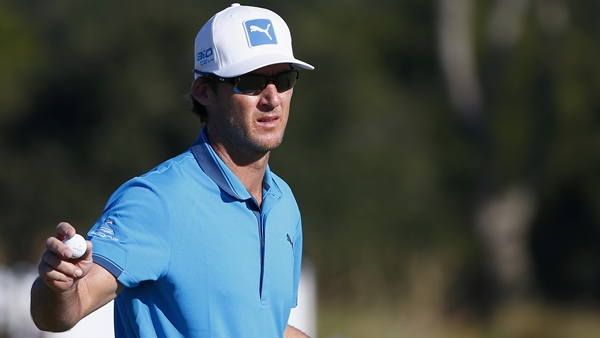 His 8-iron on the par-3 sixth hole Saturday in the McGladrey Classic headed for the flag, and he could hear it strike the pin. If the four people around the green were clapping, he couldn’t hear them. MacKenzie simply walked back to his bag and handed his club to the caddie.

“I figured it had ricocheted off,” MacKenzie said.

Except that he couldn’t find the ball anywhere on or around the green. The mystery was solved when one of the four men indicated it was in the hole.

“Most anti-climactic hole-in-one I ever had,” he said.

That shot, along with a 45-foot birdie putt on the 18th hole at Sea Island, carried golf’s free spirit to a 5-under 65 and a share of the lead with Andrew Svoboda going into the final round. Svoboda rallied from a careless double bogey by making three birdies on the last six holes for a 66.

As aces go, this was a strange one for MacKenzie.

“It was just the most boring hole-in-one ever,” he said.

Russell Henley, the 36-hole leader, was one shot behind after another solid day, except for one shot. He pulled his approach into the water on the par-5 15th hole and made bogey on the easiest hole on the Seaside course. Henley had a 68.

Stewart Cink, winless since beating Tom Watson in a playoff at Turnberry five years ago, made eight birdies in his round of 63. Defending champion Chris Kirk is progressively getting better with rounds of 68-67-66. They were part of a large group at 201, just three shots behind.

Nine players were within four shots of the lead.

Four players had at least a share of the lead at one point. Henley fell back with his bogey on the 15th. Fabian Gomez of Argentina was tied for the lead until he stumbled at the finish. He three-putted from 30 feet on the 16th and from 40 feet on the 17th, and then failed to get up-and-down from short of the 18th. He shot 68 and was in the group three shots out of the lead.

Henley and Kirk are playing for the first time since the Tour Championship on Sept. 14. Neither was sure what to expect this week, and even though Henley didn’t finish as strong as he would like, he was happy with where he was.

So was Kirk, who had five birdies and an eagle to counter his mistakes.

Kirk holed out with a sand wedge from 115 yards on the eighth hole, only to bogey the next two holes. He finished strong and still had a chance to defend his title.

“I’ve managed to put three pretty solid rounds together, and hopefully I can give them a little bit of a run tomorrow,” Kirk said.

MacKenzie also had his moments. He didn’t take the lead until a birdie on the 16th hole, only to lose focus on the next hole. He hit 5-iron, which was way too much club for the par-3 17th, and he was lucky to at least have a shot out of the wire grass. He chopped that over the green, got the next shot down to 7 feet and holed that for a bogey.

And to cap it off, he made a long birdie across the 18th green to catch Svoboda, who had to save par with a tough chip from the right side of the green.

“I was a little jumpy,” MacKenzie said. “So it was huge to make that bomb.”

Even so, it was the ace that left him shaking his head. MacKenzie said he now has three aces on the PGA Tour, though nothing stranger than his hole-in-one Saturday – mainly because he had no idea where the ball wound up.

“Finally, there was this random guy over there, like one of the four guys clapping earlier,” he said. “They were like, `Yeah, it went in. Didn’t you hear us clap?’ I was like, `Thanks, man. You guys are low-key here.’ They’re used to seeing great shots. They’re used to your Matt Kuchars and the guys, studs. I made a hole-in-one. It means nothing other than it was a 1 on the scorecard.”

But it put him into the last group Sunday with a chance to win a PGA Tour event for the first time since MacKenzie won the Viking Classic six years ago.

The 54-hole cut was at 1-under 209, and it eliminated 17 players.  Canadians Adam Hadwin (73) and Nick Taylor (75) failed to advance to the final round because more more than 78 golfers advanced past the 36 hole cut.

Among those making it to Sunday was tournament host Davis Love III, who shot 70.