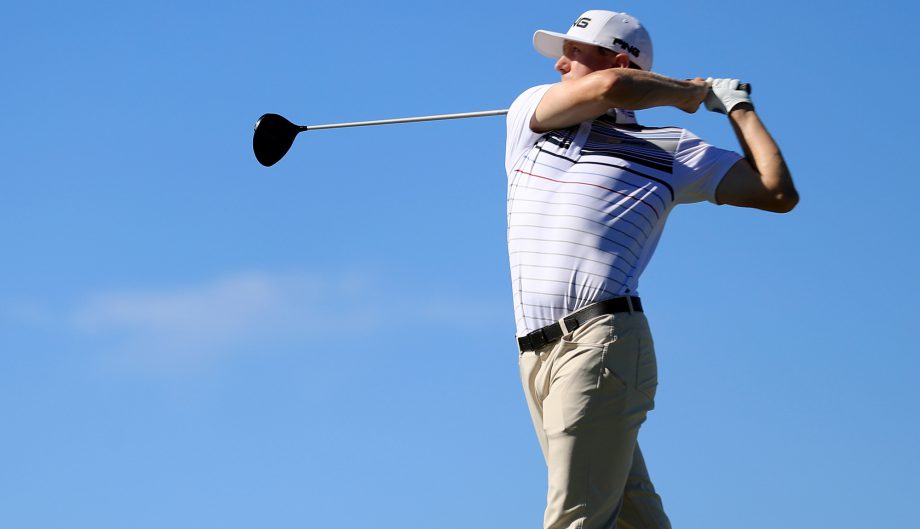 26-year-old Mackenzie Hughes has had his share of ups and downs; but his recent success serves as a reminder to other young golfers that hard work and dedication does indeed pay off.

After winning two Canadian amateur titles and three collegiate tournaments as an amateur, the Dundas, Ont. native enjoyed a relatively smooth transition to the pros in 2013 – capturing the Cape Breton Open and earning his Web.com Tour card by the end of his rookie season.

The following year was a different story as the Kent State University graduate struggled considerably – missing the cut in 13 out of 20 tournaments and lost his status on the Web.com Tour.

“Once he jumped on that Web.com Tour in 2014, he got knocked down a bit.  But he learned a lot from it,” noted Herb Page, his collegiate coach.

Page says facing and overcoming adversity is nothing new for Hughes.

“In his first year at Kent State, he had a few bumps and bruises and got knocked down but it was just a learning process.  Each year in college, he just kept getting better and better,” he pointed out.

“I think for Mac, it’s just about getting comfortable and getting his confidence.”

In 2015, Hughes returned to the Mackenzie Tour – PGA TOUR Canada eager to apply the lessons learned from 2014. He would regain his Web.com tour card later in the year – this time through qualifying school.

“Mac is a very resilient young man; just like he got better after his freshman year, I knew he would bounce back from his 2014 season,” said Page.

In 2016, Hughes has managed to put all the pieces together – earning his PGA TOUR card by finishing 17th on the Web.com money list.

The young Canadian followed that up by scoring a victory in just his fifth start on the PGA TOUR at The RSM Classic in November.

Hughes secured the victory by making a difficult 18-foot putt on the third playoff hole at the Sea Island Golf Club.

“As soon as I hit it I knew it was on a good line and I gave it some pace because I knew if I missed it I was going to be out. And about foot from the hole, I knew it was right in the heart; and it was such a good feeling to see it go in,” said Hughes in an interview with the Golf Channel immediately after his big victory.

Hughes also spoke about the significance of playing alongside Phil Mickelson in mid-October at the 2016 Safeway Open.

“It was huge just being in that atmosphere with those galleries; it prepared me to deal with what I was dealing with yesterday and today,” he said after winning on the third playoff hole.

“You couldn’t buy that experience,” added Hughes, who earned US$1.08 Million for his efforts at the RSM.

Page acknowledges that being paired with the winner of five Majors was an eye-opening experience for his former student.

“There’s a point there in terms of the confidence factor.  That was really Mac’s first event with his tour card and low and behold he gets paired with Phil.  It sort of let’s you know that you belong. Having that experience and that confidence there’s nothing like it,” he said.

Having coached at Kent State University over the past 40 years, the Ontario Golf Hall of Famer says one of the neatest things he’s experienced was receiving a call from his former student after his big triumph last November.

“It was 11:30am and my phone rings and there it is, Mackenzie Hughes……He calls me and thanks me. It’s one of the neatest calls I’ve received,” Page said.

“Mac didn’t have to pick up his phone and call his college golf coach, but he did; and it was such a class act.”

Someone else quick to speak about Hughes’ admirable qualities is former Kent State teammate, Jennifer Ha – also a teammate of Hughes as part of Golf Canada’s national team program.

“Mackenzie is one of the hardest working people I’ve ever met; he was always the first one in practice and the last one to leave…… It was great to see that he made it to the PGA TOUR and that he’s doing so well,” said the LPGA rookie.

“When you see a high level of skill, you just automatically assume talent and it’s not the case. For Mac, all that talent and skill has been earned through hard work and doing the right things and having a great attitude and being disciplined. It may be boring but it really works,” said Ingram.

“So other young Canadians, juniors and amateurs and young pros can look at Mac and say ‘Yeah I can do that…..If I want to work as hard and be as diligent and have an unbelievable attitude, then maybe I can be a PGA TOUR winner one day.’”

Having worked closely with Hughes during his victory at the RSM, Ingram believes the best is yet to come for the PGA TOUR rookie.

As a member of Golf Canada’s Young Pro Program, Hughes works closely with Ingram and has access Team Canada’s sports science staff, which includes a sports psychologist, along with a physiotherapist and strength coach.

Having recently married his long-time girlfriend, Jenna, the 26-year-old is certainly well supported off the golf course in his quest to achieve his full potential on the golf course.

“The sky’s the limit for Mac because he’s got the right habits and discipline and work ethic; and he’s got a great team around him,” said Ingram.

“I think he’s a guy that can win a major on the PGA TOUR.”