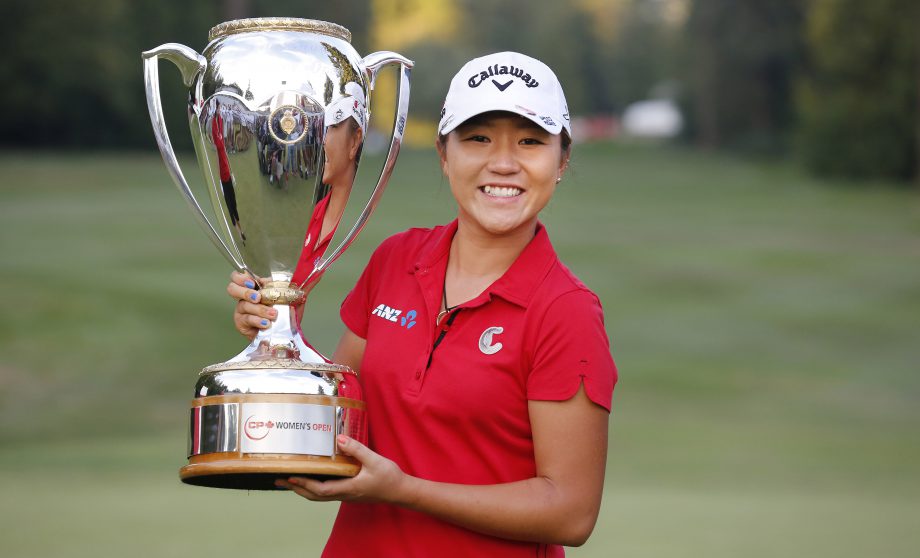 “It feels amazing,” Ko said. “It’s great to come back to Vancouver and play well in front of such big crowds. I had an amazing week. I didn’t know that in 2012, I might be coming back here in a couple years, and then win here again. So many great memories here and hopefully we’ll be able to come back here.”

The victory is the eighth of Ko’s young career and the three wins in Canada ties her with Meg Mallon and Pat Bradley for the most in tournament history.

“It would have been great if I was coming down the 18th with like a four-shot lead like I did in 2012,” Ko said with a smile. “But it is what it is. Stacy played amazing today; to shoot 67 under those conditions.”

Lewis forced the playoff with a 5-under final round to tie Ko, who shot an even par 72 on Sunday, and send the duo back to the 18th for extra holes.

On the playoff hole, Lewis found trouble off the tee and with her approach and was forced to scramble for a missed par attempt, while Ko calmly hit the fairway and green and then two-putted for her third victory of 2015.

“I said, hey, you’ve just got to concentrate on your game, just one shot a time, and that’s what I tried to do,” Ko explained. “I said, I don’t want to get too aggressive to that pin but maybe it was a little bit too safe and maybe wasn’t the best shot going in. I made a really good first putt on my normal 72nd hole, and made a good putt on the first playoff hole. If the put was any longer for my second one, I would have been really nervous.”

“Well, if you would have told me at the beginning of the day, I was going to be in a playoff, I would have been pretty happy,” Lewis admitted. “Just with the way my game has been over the last month or so, I felt I was close to putting together a good round, and that’s what I did today. Still left a few out there. But would have liked a better lie in the rough in the playoff, but other than that, it was pretty good.”

While Ko has taken home the trophy three times, 2015 will mark the first time that Ko is able to take home a winner’s cheque in Canada as her victories in 2012 and 2013 came when she was still an amateur.

“You know, really the cheque is the last thing I’m thinking about,” Ko said. “It’s great to be back in the winner’s circle, and to play good golf in front of great crowds was really one of the highlights of this week. I kind of feel like somewhat Canadian. But the CP Women’s Open is such a great event, with the top players playing here, so, you know, every year, I have fun.“

Brooke Henderson capped a special homecoming at The Vancouver Golf Club with her best round of the week, a 5-under 67 to finish with a tournament-total 4-under and the Sandra Post Low Canadian Medal. The 17-year-old came into Canada’s National Women’s Open Championship fresh off a victory last week at the LPGA Cambia Classic in Portland, a historic accomplishment that put her centre-stage all week long with fan and media expectations.

“I’ve received quite a bit of attention in my amateur days and then earlier this year playing well. But after a win and coming back to Canada, I have received a lot of attention that made my schedule extremely busy,” said Henderson who finished T23 to add $22,816 to her 2015 earnings. “But it’s a great problem to have, as I’ve been saying to a lot of people. I learned a lot about myself and how I can handle it, and I think it will be good for the next time.”

Rounding out the Canadian trio to make the cut was Alena Sharp of Hamilton, Ont. who carded a final-round 75 to finish T47 and Maude-Aimee Leblanc of Sherbrooke, Que., whose final-round 80 dropped her into a share of 74th position.