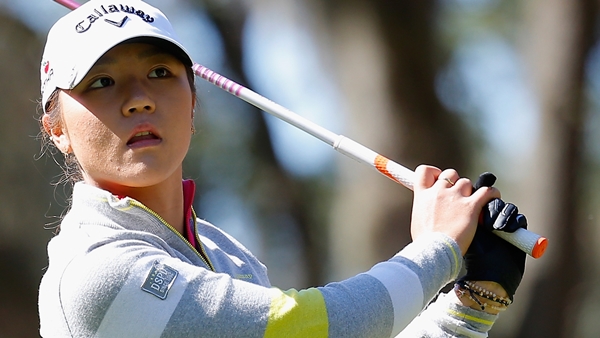 OCALA, Fla. – During a closing stretch that featured one of the more tumultuous final hours in recent LPGA Tour history, teen wunderkind Lydia Ko faced a series of tough predicaments. But a query that came after the final round gave her the biggest pause of all.

After reclaiming the lead late Saturday to set herself up for a double payoff of sorts, the 17-year-old double-bogeyed the 71st hole in the inaugural Coates Golf Championship to lose by a shot to Na Yeon Choi.

However, Ko secured a piece of history that could be remembered long after the details of the tour’s season opener are forgotten. The New Zealander became the youngest player of either gender to climb to world No. 1, breaking the record set by Tiger Woods by almost four years.

As the ramifications of the distinction finally took hold, the sting of defeat at Golden Ocala Golf and Equestrian Club wasn’t quite so bad. The notion of celebrating, which first set her back for a moment, didn’t seem so crazy after all.

“It’s going to be good,” Ko said. “I was here to focus on the tournament itself, but I guess I got a great outcome at the end of the day, too.”

After leading by as many as four shots on the front nine, Ko trailed Choi by a shot as they played the par-3 15th. With Choi facing a 6-footer for birdie, Ko slammed in an improbable 60-footer and Choi promptly three-putted for a two-shot swing.

The teenager’s lead didn’t last long. Ko drove into a fairway bunker, then fanned a hybrid shot into a stand of pine trees down the right side of the 17th hole, scrambling to make a double bogey.

As the steadier Choi finished with a 4-under 68 and 16-under total, Ko had to salvage a par on the 18th to finish in a three-way tie at 15 under, but it was good enough to secure a piece of the record book.

“It’s a nice consolation, if you want to call it that,” said Ko’s swing coach, David Leadbetter.

Ko, whose pulse rate seems to be frozen at about 75 beats per minute whether she’s making an eagle or double bogey, hardly seemed derailed by the 71st-hole meltdown. Her indefatigable nature is her biggest asset, Leadbetter said.

“We sent her to anger management school to learn how to get angry,” Leadbetter laughed.

“I think I was so nervous out there,” said Choi, who recorded her eighth LPGA victory and was fighting back tears. “I was waiting so long for this moment.”

Choi, one of the game’s elite players before the two-year victory drought set in, admitted that the pressure to succeed wore her down to the point that she stopped reading Korean sports websites and considered downgrading her cellphone plan so she could not download stories about her play.

“I think I had a lot of stress from the result,” Choi said. “Even if I was top 10 or top five, not many people said you did a good job if you finish as runner up. They say you are a loser and that hurts me a lot.”

As for Ko, her ascent seemed ordained when she won her first LPGA Tour title as an amateur at age 15, the youngest in tour history.

“I can’t say I’m surprised,” American star Stacy Lewis said of the new No. 1. “It was just a matter of time.”

Ko, a native of South Korea who moved to New Zealand as a youngster, unseated Inbee Park in the top spot.

“She’s probably the straightest player out here,” said Park, who tie for 17th. “The golf gets easier if you hit the ball straight and you can roll the ball in.”

Ko hit a few crooked shots down the stretch, which ultimately cost her the first-place trophy, but once the magnitude of the moment took hold, she was all smiles.

“There was obviously a loss,” Ko said. “But there was a huge positive, too. That’s pretty awesome.”