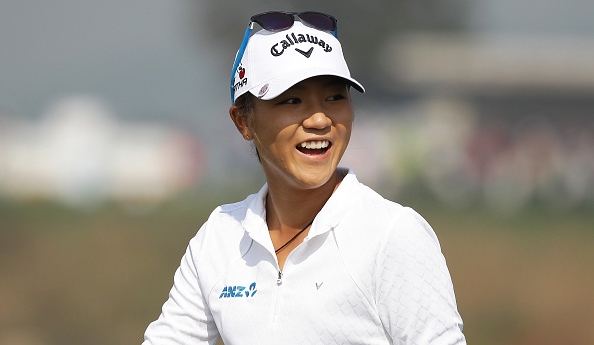 In position to take the top spot in the world, the second-ranked Ko overcame a double bogey with two late birdies in a 3-under 69. Park bounced back from a second-round 74 with a 67 to match Ko at 13 under 203 on Sky 72’s Ocean Course.

“You might not even get one day out of the 365 days in a year where you hit it perfect,” Ko said. “I always say I love golf, because there is no perfect.”

Ko made the double bogey on the par-4 14th, driving left into the water and missing a 4-foot putt. The 18-year-old South Korean-born New Zealander rallied, driving the short par-4 15th to set up a two-putt birdie and making a 10-foot birdie putt on the par-3 17th.

“There’s still a long day ahead of me,” Ko said. “But if I am holding the trophy at the end, it will be very special. To win at your birthplace, it’s hard to do. To be able to win in front of the Korean fans and my family and relatives who have flown over from Jeju Island, I think it would be a very special moment.”

Park birdied three of the last four holes, also driving the 15th, holing a 20-footer on 17 and chipping to 2 feet on the par-5 18th. Making her first career LPGA Tour start, the 22-year-old South Korean player opened with a course-record 62. She would earn an LPGA Tour card with a victory.

“Actually, I had this conversation with my mom and we were just talking about it,” Park said. “I told her, ‘If I should win this championship, I still don’t think I’m ready for the LPGA Tour.’ And even if I don’t win tomorrow, I think I would be quite satisfied with the results of the championship so far.”

Ranked 54th, Park won the Korea LPGA’s Se Ri Pak Invitational two weeks ago for her third victory of the season. She won the Korea Women’s Open in June.

“To be really honest, I don’t think I ever really thought about winning, and so I wasn’t really confident coming into this week,” Park said. “I was more worried and nervous, but I’m quite proud of myself.”

Ko would take the No. 1 ranking from Inbee Park with a victory Sunday and also could move up with a second- or third-place finish depending on where her South Korean rival finishes. Inbee Park was tied for 18th at 5 under after a 70.

Ko tied for second last week in the LPGA Malaysia after winning her previous two starts in Canada and France, where she became the youngest major champion. Ko and Inbee Park, a two-time major winner this year, are tied for the tour victory lead with four.

American Lexi Thompson and South Korea’s Mirim Lee each birdied the 18th to pull within a stroke of the lead. Thompson had a 69, and Lee shot 67.

“I just know I need to make birdies, focus on myself and control my game,” Thompson said. “That’s all I can do. Lydia is playing great and she’s going to make birdies, we all know that. But it’s not just her.”

Thailand’s Moriya Jutanugarn and South Korea’s Yoon-Ji Cho were two strokes back at 11 under. Jutanugarn holed out from 110 yards for eagle on the par-5 fifth in a round of 67, and Cho had a 69.