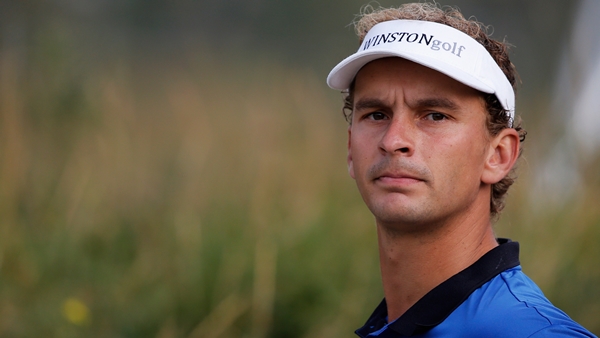 ZANDVOORT, Netherlands – Defending champion Joost Luiten fired a 5-under-par 65 and has a share of the clubhouse lead at the KLM Open after the first round was interrupted when Fabrizio Zanotti was hit on the forehead by a wayward tee shot on Thursday.

Zanotti was driven off the Kennemer course in an ambulance for checks at a nearby hospital after being hit. The Paraguayan later tweeted he was discharged from the hospital and would be taking “a couple of weeks off.”

Thanks a lot to all the players for the messages and especially to Ricardo Gonzalez and @FelipeAgui for being always with me!!!

The nearly two-hour suspension caused by Zanotti’s injury did not faze Luiten, who was even par when play stopped. He shot three birdies and an eagle over his last seven holes.

“That’s how I would like to start every tournament,” Luiten said.

The Dutchman started on the 10th tee and had eight straight pars before birdieing the 18th and giving up the stroke immediately with a bogey on the first.

He parred the second before play was halted and then made his move.

“I stayed patient and got my chances,” he said. “I had a few good holes at the end. Holes six, seven and eight are a corner where you can score well, especially today with the wind behind you.”

Jamie McLeary of Scotland was also at 5 under when his round was suspended by darkness with two holes to finish early Friday.

McLeary birdied his final hole of the day, the seventh, to draw level with local favorite Luiten.

Former French amateur champion Gary Stal and Italians Edoardo Molinari and Andrea Pavan were a shot back at 4 under.

Zanotti was playing the 16th hole, his seventh of the opening round at the Kennemer club, when he was struck by a ball hit from the 14th by Alexandre Kaleka.

Players Felipe Aguilar and Ricardo Gonzalez accompanied Zanotti to the hospital. All three players withdrew from the tournament.

Zanotti, who won the BMW International Open in June, had one bogey and a birdie to put him at even par when he was hit.