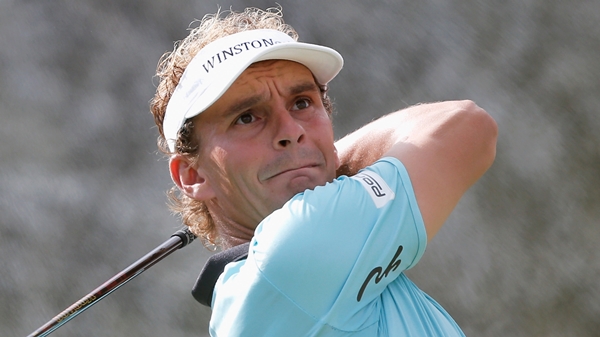 NEWPORT, Wales – Joost Luiten birdied seven of his last 10 holes to grab a one-shot lead in the first round of the Wales Open at Celtic Manor on Thursday.

Luiten parred his opening eight holes before storming up the leaderboard with a 6-under-par 65 on the Twenty-Ten course.

Of Europe’s four Ryder Cup players in the field, Jamie Donaldson shot a quiet 1-under 70, Thomas Bjorn birdied the 18th to finish on par, Lee Westwood, who hasn’t played in a month, bogeyed his last two holes to card a 2-over 73, and Stephen Gallacher failed to manage a birdie in a 7-over 78.

“I haven’t played in three weeks, so there’s a fair bit of rust in my game, but then I am thinking more about next week than this week,” Gallacher said.

Luiten needed just 28 putts to match a similar score he shot on the opening day of last week’s KLM Open, where the Dutchman eventually finished in a tie for fifth.

“A 6-under-par start is always very good,” he said. “I holed some good putts and, looking back, I only missed one green all day, and had one bogey, and that was on 17.”

One shot behind and tied for second with Andrew McArthur of Scotland was former Ryder Cup star Nicolas Colsaerts, who hit the longest recorded European Tour drive.

The Belgium-born Colsaerts, who played in the 2012 Ryder Cup, hit his tee shot 447 yards at the 575-yard, par-five 18th hole. That left him with a wedge to the green, and he walked off with an eagle three.

“The hole was playing downwind and I managed to get a good bounce. I thought it was too far right but there is a bit of a speed trap down the right side of the fairway, and it must just have luged it down there,” he said.

Another stroke back at 4 under in a share of fourth place, were South Africa’s Justin Walters and Englishmen Robert Rock and Sam Walker.