LPGA gets new title sponsor for its first major 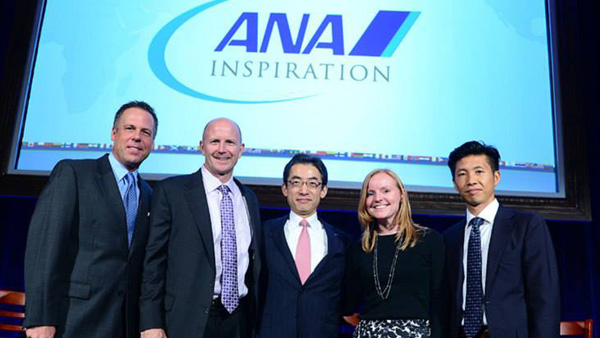 NAPLES, Fla. — The LPGA Tour added one new tournament and one big sponsor.

Along with releasing another strong schedule for 2015, the LPGA Tour announced Tuesday that All Nippon Airways has signed a five-year deal to be the title sponsor of the first major championship of the year in the California desert.

The ANA Inspiration replaces the Kraft Nabisco Championship in name only. Still intact are the traditions at Mission Hills Country Club in Rancho Mirage, from Dinah Shore’s name on the trophy to the winner jumping in Poppy’s Pond and wearing a white robe.

“I think most fans of not just the LPGA but of golf and sport in general know when they watch that event that this is the event where the winner jumps in the lake,” said Karrie Webb, a two-time winner of that major. “I think it’s very important that we stay at Mission Hills, and another reason why we’re glad ANA was happy to come to Rancho Mirage.”

The purse will increase to $2.5 million next year, and is expected to go to at least $3 million by the end of the contract.

It was the second major in which the LPGA Tour was able to replace a title sponsor. Wegmans ended its sponsorship with the LPGA Championship, and the tour joined with the PGA of America to create the KPMG Women’s PGA Championship.

Only a few years ago, the LPGA Tour had a 23-tournament schedule.

Now it is up to 33 tournaments, which doesn’t include the Solheim Cup that will be played in Germany next September.

The LPGA Tour added one tournament to its schedule – the Coates Golf Championship, which will be played in Ocala, Florida the last week in January. That gives the LPGA Tour a Florida tournament in January for the first time since 2001.

That will be followed by the Pure Silk-Bahamas LPGA Classic, meaning players have two tournaments before its three-week Asia and Australia swing.

“We wanted to make sure that our U.S. fan base and media connected with us before we went to Australia, Thailand and Singapore, which we didn’t do a few years back,” Commissioner Mike Whan said.

The LPGA has a six-week swing through Asia at the end of the year, as usual, before winding up with the Lorena Ochoa Invitational in Mexico and the season-ending CME Group Tour Championship.

The 2015 LPGA schedule includes two stops in Canada. The Manulife LPGA Classic will head to a new venue in 2015, being contested June 3-7 at Whistle Bear Golf Club in Cambridge, Ont. The Canadian Pacific Women’s Open, conducted by Golf Canada, will head to The Vancouver Golf Club in Coquitlam, B.C. August 17-23.