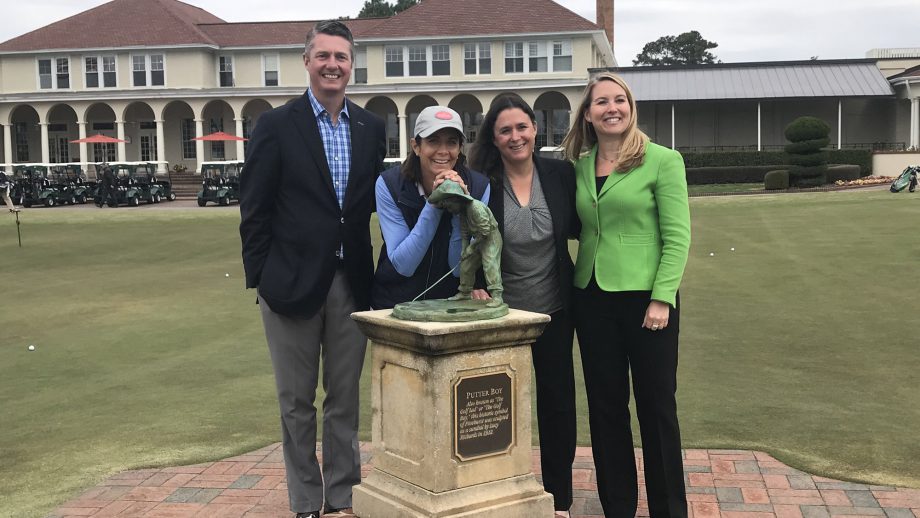 DAYTONA BEACH, Fla., April 11, 2018 – The LPGA today announced Blue Cross and Blue Shield of North Carolina as the presenting sponsor of the brand-new LPGA Q-Series. The LPGA also announced that the first edition of the revamped final stage of the LPGA Qualifying Tournament will take place at Pinehurst Resort in North Carolina from Oct. 22-Nov. 3, 2018.

Blue Cross NC has signed a three-year deal to be the presenting sponsor of the LPGA’s Q-Series.

“Blue Cross NC is proud to have this chance to make a meaningful investment in female leadership and empowerment,” said Reagan Greene Pruitt, Blue Cross NC Vice President of Integrated Marketing and Community Engagement. “We encourage women to find their own ways to Live Fearless, whether that’s through adopting healthy diet and lifestyle choices, making informed health care choices for themselves and their families, or even attempting to qualify for the LPGA Tour. We hope these talented golfers inspire women and girls of all ages to test the limits of their comfort zones as they pursue their Live Fearless dreams.”

Instead of 90 holes like the old Final Stage, the new Q-Series will be 144 holes. Players will compete in two, four-day tournaments with cumulative scores over the eight rounds for a $150,000 purse, which will be distributed at the end of the eight rounds.

“We’re very happy that Blue Cross and Blue Shield of North Carolina has decided to partner with the LPGA in the launch of the Q-Series,” said LPGA Commissioner Michael Whan. “Together we will identify the next group of LPGA stars through this new and exciting format. Pinehurst Resort will provide a world-class platform for the competitors in their quest to qualify for the LPGA Tour, all in an enhanced format that we’re really excited to showcase in October.”

The LPGA will debut the new Q-Series at the historic Pinehurst Resort in Pinehurst, North Carolina, which has hosted several prestigious tournaments including the 2014 U.S. Women’s Open.

There will be no cut for the LPGA Q-Series field, which will include players who finished 101 to 150 and ties on the current-year LPGA official money list as well as players 11 to 30 and ties from the Symetra Tour official money list. A maximum of 10 spots will go to players in the top 75 of the Rolex Women’s World Golf Rankings while the top five collegiate players in the country (according to Golfweek/Sagarin College Rankings) will also be exempt into Q-Series. The field will be rounded out by top finishers from Stage II of Qualifying School. The number of players who will advance from Stage II to Q-Series will be determined prior to the start of Stage II.

At minimum, the top 45 finishers and ties from Q-Series will receive LPGA membership in category 14 of the LPGA Priority List, with the rest earning Symetra Tour membership. For a comparison, at the 2017 Final Stage 20 players earned their full LPGA cards.

“What I like most about the Q-Series is that it will be a true test for how players will qualify for the LPGA Tour,” Whan said. “The playing status earned by competitors at Q-Series will be a direct reflection of eight rounds of head-to-head competition on a demanding test of golf at Pinehurst Resort.”

As part of the updated Q-Series, the LPGA is also announcing relaxed rules for amateurs. Amateurs will be able to play all stages of the new LPGA Qualifying School, and those who earn LPGA status at Q-Series can defer acceptance of LPGA membership until July 1st the following year but cannot play as an amateur on the LPGA with Q-Series status. As in previous years, players can join and play on the Symetra Tour as an amateur (can turn professional at any time or remain as an amateur).

Stage I of Qualifying School will be held from Aug. 20-26, 2018 at Mission Hills Country Club in Rancho Mirage, California, while Stage II will be Oct. 13-18, 2018 in Venice, Florida at the Plantation Golf and Country Club.