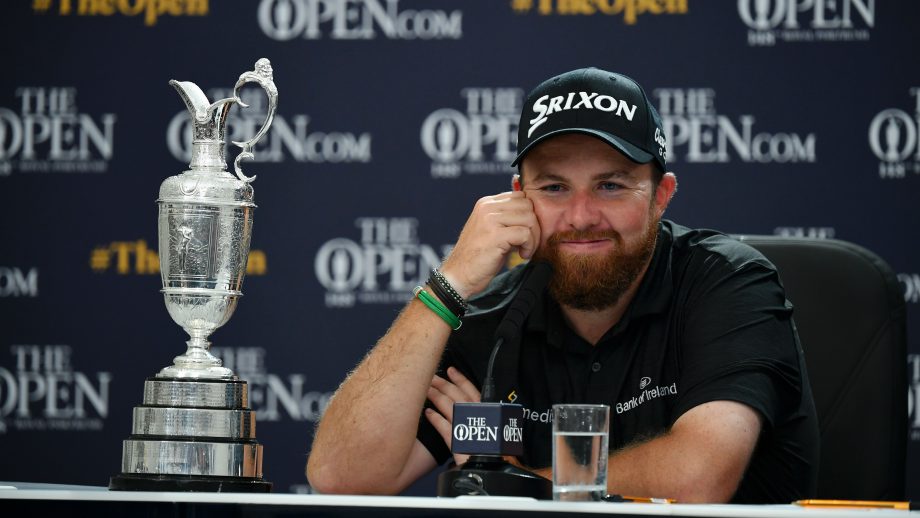 PORTRUSH, Ireland – Shane Lowry made the 68 years between British Opens in Northern Ireland worth the wait.

The silver claret jug is staying on the Emerald Isle.

Lowry, the 32-year-old Irishman with stout nerves and a soft touch around the greens, endured the worst weather of the week and the Sunday pressure of a sellout crowd cheering him along to win the British Open by six shots at Royal Portrush.

Even as the rain stopped, the tears began flowing.

It was never really in doubt.

Lowry closed with a 1-over 72, the first time since 1996 the Open champion was over par in the final round, and it was no less impressive. More difficult than the rain was wind strong enough to break an umbrella. Lowry began making bogeys in the middle of the round without losing ground. No one from the last 12 groups broke par.

And no one got closer than three shots all day of Lowry, who finished at 15-under 269.

Thousands of fans who filled these links off the North Atlantic began to celebrate when Lowry, after his fourth bogey in seven holes, rolled in an 8-foot birdie putt on the 15th hole to stretch his lead to six with three holes to play.

Lowry’s smile got wider with every hole coming in.

When his approach to the 18th was just on the fringe, he stretched out his arms, hugging caddie Bo Martin. The loudest cheer of a raucous week was for a tap-in par that made Lowry a major champion.

“He’s done brilliantly,” Lee Westwood said after grinding out a 73 to tie for fourth. “All the chasers would have wanted tough conditions and he’s clearly played brilliantly to be on the score he has, under the pressure he’s under.”

Tommy Fleetwood had to settle for his second runner-up finish in a major. He missed a 10-foot birdie putt on the opening hole that would have cut the deficit to two, and he missed a 5-footer for par on the third hole. His hopes ended with a double bogey from the bunker and the rough, and he closed with a 74.

Tony Finau shot 71 to finish alone in third, though he was never closer than seven shots. Brooks Koepka, going for his fourth major in the last seven, began the final round seven shots behind and opened with four straight bogeys. He shot 74 and tied for fourth.

Royal Portrush last hosted the British Open in 1951, the only time it had been outside Scotland and England. It pinned hopes at the start of the week on Rory McIlroy, who missed the cut by one shot. It celebrated Darren Clarke hitting the first tee shot Thursday. The other Ulstersman, Portrush native Graeme McDowell, basked in the loudest cheers he has heard this side of the Ryder Cup when he walked up the 18th green on Sunday.

And then along came Lowry, who teamed with McIlroy to bring Irish golf a European Amateur title in 2007, and who won the Irish Open as an amateur 10 years ago. He joins Padraig Harrington as Irishmen to win majors, while McIlroy, McDowell, Clarke and Fred Daly are major champions from Northern Ireland.

“Everyone knows we’re all one country when it comes to golf,” Lowry said.

It was one big group hug when it ended, starting with his wife and daughter, and his parents. Harrington and McDowell were among those waiting behind the 18th green to share in the celebration, along with Koepka and his caddie, Ricky Elliott, once a promising amateur who grew up at Royal Portrush.

“I didn’t feel great out there. It was probably the most uncomfortable I’ve ever felt on a golf course,” Lowry said. “You’re out there trying to win an Open in your home country, and it’s just incredibly difficult.”

It showed early when Lowry pulled his tee shot into the rough, hit into a deep bunker well short of the green and had to make an 8-foot putt just to escape with bogey. The wind was picking up and it was relentless for so much of the day. Lowry made his move on the more forgiving start, with three birdies in a four-hole stretch through the par-5 seventh that boosted his lead to six.

Everyone except Fleetwood fell back.

J.B. Holmes, who shared the 36-hole lead with Lowry until falling back Saturday, really went the wrong direction. He hit his first tee shot out-of-bounds. And it only got worse. He made one birdie and shot 87.

Lowry’s lead was four shots when he saved par from a bunker left of the par-3 13th. Even on his bogey at the hole, he added to his lead when Fleetwood hit a poor shot from the fairway bunker into the rough, couldn’t get to the green and three-putted for a double bogey.

“I never really got close enough, and Shane played great,” Fleetwood said. “The conditions were horrendous. It was Shane’s time, Shane’s tournament.”

Lowry shared it with his family who paved the way, the players who inspired him. And after he was introduced as “champion golfer of the year,” he shared it with thousands of people he didn’t even know, all of them crammed along the hillocks and swales, along the edge of the ocean, and who sat in the horseshoe-shaped grandstands under umbrellas waiting for the Irishman to arrive.

Holding up the claret jug, Lowry said to them, “This one’s for you.”