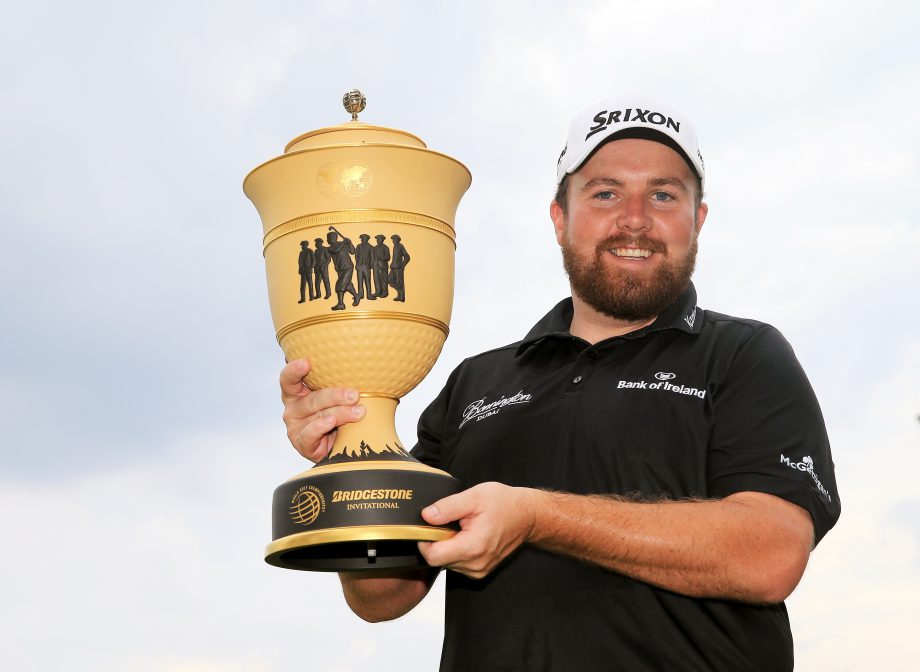 AKRON, Ohio – Shane Lowry began daydreaming Sunday morning about lifting the Bridgestone Invitational trophy on the 18th green, and then he would quickly return to reality because he knew there was a long day ahead with world-class players all around him.

Turns out he was right.

He just never could have dreamed how it unfolded.

Lowry hooked one tee shot so far left that he was given a free drop because the 11th tee box was in the way. He opened the face of a pitching wedge to hit over a 50-foot tree and made birdie. Lowry finished the biggest round of his career with a sand wedge that he hammered through a tree on the 18th to just over 10 feet for a closing birdie.

Not to be overlooked were two huge par saves that carried him to a 4-under 66 and a two-shot victory over Bubba Watson.

“It’s fairly special to do that against such a good field, to shoot bogey-free 66 on a golf course like that,” Lowry said. “I know it will stay with me now for the rest of my career. I’ve done everything I needed to do today.”

Watson also closed with a 66. Jim Furyk and Justin Rose, who shared the 54-hole lead, fell behind on the front nine and couldn’t catch the 28-year-old Irishman. Both closed with a 72 and tied for third.

Lowry produced a flawless card and a full supply of fist pumps for his biggest victory. He won the Irish Open in 2009 as an amateur, and then added the Portugal Masters three years later. He wasn’t even sure he was in the Bridgestone Invitational until he narrowly qualified at No. 48 in the world.

He became the first non-PGA Tour member to win a World Golf Championship since Martin Kaymer at the 2011 HSBC Champions. Lowry moved to No. 19 in the world and plans to play both tours next year.

“To beat those guys down the stretch on a golf course like this … it just shows a lot about my game, that’s it good enough to compete at any level,” Lowry said.

Lowry had a one-shot lead when Furyk made his second bogey on the front nine, but the Irishman appeared to be in trouble with a wild hook off the 10th tee. Instead, he powered a wedge as high as he could, over a tree and listened for the gallery’s roar to hear the results. It plopped down and rolled to within tap-in range for a birdie that gave him control, and he never let up.

Just as important as his birdies were two pars on the back nine when he was trying to steady his nerves.

Lowry found a deep bunker left of the 14th fairway, came up short of the green and faced an 18-foot par putt that he buried to stay two shots ahead. Watson was up to his old theatrics with a shot out of the trees to 6 feet for birdie on the 17th to get within one shot. Lowry, playing two groups behind him, pulled his approach on the 17th and faced a tough chip from behind the green and he could only get within 6 feet. He holed that for another big par to keep his cushion.

“I was just trying to make two pars coming in after I saw Bubba make his birdie on 17,” Lowry said. “The up-and-down on 17 was probably the biggest up-and-down of the week considering the circumstances.”

Lowry finished at 11-under 269 and earned $1.57 million, along with a PGA Tour card for the next three years. He had been a special temporary member.

Watson was stunned that two wedges down the stretch bounced so hard on the greens and took away reasonable birdie chances – one on the par-5 16th and on the closing hole after a drive that rolled out nearly 380 yards.

“I nipped it, took paint off the ball and cut it with a 63-degree lob wedge and it just bounced,” Watson said. “Now knowing that if I had hit the tree, it spins more on 18. That’s what I should have done. Tell Lowry that was unbelievable.”

Furyk and Rose were annoyed for different reasons – Furyk because he’s not hitting the ball very well, Rose because he is.

“I’m playing better than anyone in the world right now tee-to-green,” Rose said. “So hopefully, it’s a big-boy golf course next week and the long game really helps me out. I just (need to) putt a little bit better and give myself another chance.”

Furyk was concerned about the way he was hitting the ball earlier in the week and said his flaws were covered up by great putting. He couldn’t rely on it Sunday.

Masters and U.S. Open champion Jordan Spieth closed with a 66 and tied for 10th, his fifth straight top 10 during a stretch in which he has won four times.