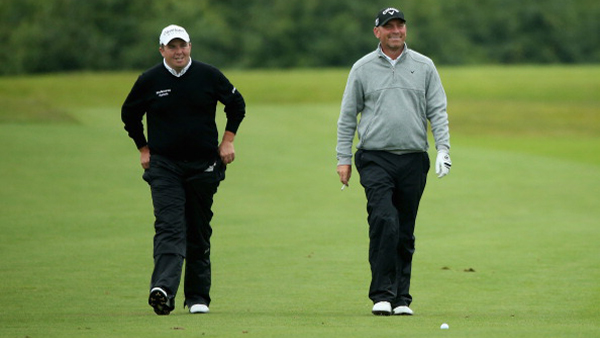 VIRGINIA WATER, England  – Shane Lowry birdied his closing two holes for a 2-under 70 Friday to join Thomas Bjorn in the lead after the second round of the BMW PGA Championship.

Lowry overcame a double bogey on the ninth hole by making four birdies on his back nine to erase a two-shot deficit to Bjorn, who carded a 72 on a day of intermittent rain showers. The duo was four shots clear of the field with 10-under totals of 134.

Spain’s Rafa Cabrera-Bello (73) and former BMW PGA winner Luke Donald (67) were tied for third. Rory McIlroy was another shot back along with Swedish duo Jonas Blixt and Henrik Stenson after all three carded 71.

The 27-year old Lowry won the 2009 Irish Open in a playoff as an amateur, and then added the 2012 Portugal Masters title after turning professional. This, though, would be by far the biggest win of his career.

“I just have to go out and keep doing what I have been doing,” the 142nd-ranked Irishman said. “I’ve got my coach with me this week, so he’s quite good at getting me ready to play no matter what situation I’m in. And it will be good to go out with Thomas tomorrow and see how I get on.”

Bjorn led by two shots after the first round of the European Tour’s flagship event, but found that advantage gone with bogeys at the first and seventh holes.

But Bjorn birdied his 15th and final holes minutes before Lowry birdied 17 and the last to finish tied for the lead with the Dane.

“We’ll go out and work hard on the weekend and see what the conditions are like and try and play the golf course and not the opponents,” Bjorn said. “There’s two very hard days ahead of us, so we know what this championship is all about. “

Defending champion Matteo Manassero missed the cut after following up an 80 with a 71.

McIlroy fought back from double bogey on the seventh hole, which he eagled the day before, to stay in contention.

McIlroy finished much better than he started, as he eagled the par-five 12th for a second straight day, and birdied three of his last four holes.

“The way the conditions were this morning, being 3-over par after seven wasn’t all that bad, and it wasn’t disastrous,” he said.

“My golf hasn’t been too great but I kind of saved myself a couple of times, hitting some really good shots,” Blixt said. “I don’t think now with the rain settling in that anyone is going to run away with it.

“But I can’t remember the last time I played wearing so much clothing. It became really cold out there.”