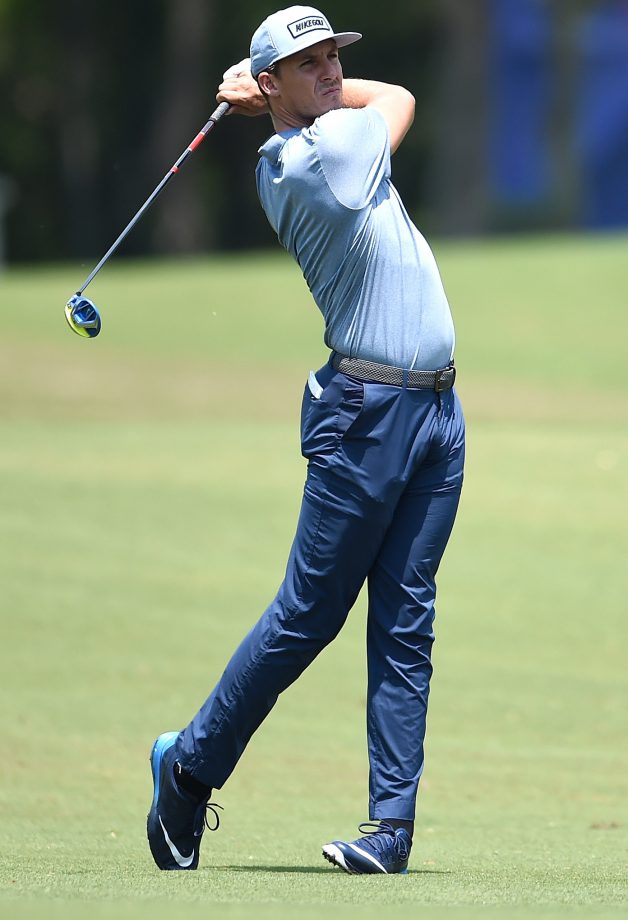 AVONDALE, La. – Jamie Lovemark and Jhonattan Vegas shared the Zurich Classic lead at 11 under Friday when second-round play was suspended because of darkness.

Lovemark had a 27-hole day at hot and humid TPC Louisiana, completing a 5-under 67 in the first round and adding a 66 in the second in the event that fell behind schedule Thursday with a long rain delay.

“Just happy to be alive,” said Lovemark, winless on the PGA Tour. “It was hot, humid. It’s a tough walk, just soft, so ate a ton, walked slow. Not too bad. …

“I’m going to go sleep, man, find some AC, chill a little bit. I’m staying in town, so get some good food and just kind of relax, watch some basketball.”

“Long day,” Vegas said. “I played 30 1/2 holes today. I knew it was going to be an extremely long day, so I just kind of kept the mentality and hit one shot at a time and just played as hard as I can. The course was a little easier this morning with the greens being soft, but the wind picked up in the afternoon, and this course was really hard.”

None of the players in the afternoon wave finished the round, with top-ranked Jason Day at 5 under and facing a 15-foot birdie putt on the par-5 11th when play resumes. The Australian is the first No. 1 player to play in the event since David Duval in 1999.

Brian Stuard, the overnight leader after a 64 on Thursday, was a stroke behind the leaders at 10 under with six holes left.

Harold Varner III was 8 under after a 67. He and Tiger Woods are the only players of black heritage with PGA Tour status this season.

“I just think I’m obviously putting better,” Varner said. “You get out of a few jams when you chip it bad and you hole a few putts you’re supposed to hole, it just makes it a lot easier.”

Canadians Adam Hadwin and David Hearn are both 3 under. Hadwin, of Abbotsford, B.C., finished his round with a 69. Hearn, of Brantford, Ont., is through seven holes and is currently even.

Nick Taylor, of Abbotsford, B.C., is even through 11 holes while Mike Weir of Bright’s Grove, Ont., shot a 3-over 75 in his second round and is currently slated to miss the cut.

Vegas won the 2011 Bob Hope Classic for his lone tour title. He made a double bogey on the par-5 11th – his second hole of the second round – after losing a ball on his second shot.

“I just hit a bad shot,” Vegas said. “I shouldn’t have really gone that close to that tree, but it’s part of the game. I was proud to kind of get my head on the next shot and the next hole and bounce back with birdies after that.”