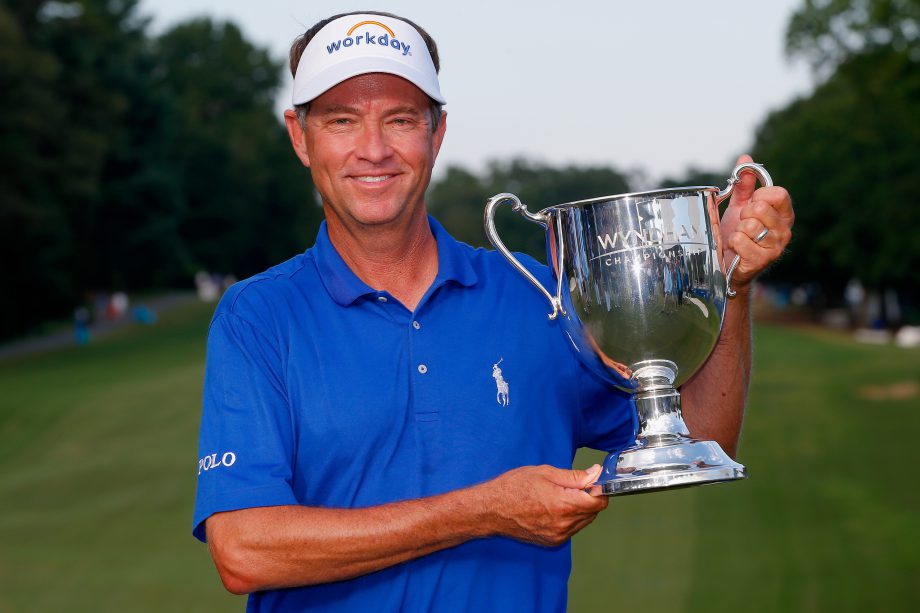 GREENSBORO, N.C. – During their practice round together before the Wyndham Championship, Tiger Woods pumped local favorite Davis Love III for tips on how to play the course.

Looks like Love saved a few secrets for himself.

Love became the third-oldest winner in PGA Tour history with his victory Sunday, while Woods’ season came to an abrupt end.

The 51-year-old Love closed with a 6-under 64 for a one-stroke victory over Jason Gore.

“Tiger and I were talking on the putting green – one of us needed to get going and win this thing,” Love said.

Woods had trouble getting his final round started.

The dominant storyline all week at Sedgefield Country Club was the mere presence of Woods, who needed a victory to earn a spot in the FedEx Cup playoffs opener next week.

He was poised to challenge Sunday, starting just two strokes off the lead. But he only had one birdie during his first 10 holes, dropping way off the pace with a triple bogey on the par-4 11th. Woods shot a 70, finished four strokes back and ended at No. 178 in the standings, well outside the top 125.

“I gave myself a chance, and I had all the opportunity in the world today to do it,” Woods said. “I didn’t get it done.”

Now comes a break before his next tournament, the Frys.com Open in October in northern California. It’s the first event of the tour’s 2015-16 season.

“This is my offseason right now,” he said.

“Any victory now is going to be really sweet when you’re over 50,” Love said.

Love has 21 career victories, three in Greensboro. His previous two wins came across town at Forest Oaks Country Club in 1992 and 2006, and he had just one win since then – at the 2008 Children’s Miracle Network Classic in Florida.

“To have your name thrown out there with Sam Snead at any point is incredible,” Love said. “For some reason, this tournament has been good to guys in my age group.”

Love, four strokes back after three rounds, started strong with four birdies and an eagle on Nos. 2-6. He moved to 17 under with an eagle on the par-5 15th – the first of his career during a competitive round on that hole.

He closed with three straight pars, walked off the 18th green with a two-stroke lead over Brown and Gore, and headed to the range to hit a few shots and rest up for a possible playoff.

“You don’t really know what to do,” Love said. “You don’t go to the cabin and think that you’ve won.”

Brown pulled within one stroke of Love with a birdie on 15, and Gore made things even more interesting with an eagle on that hole.

Neither got any closer.

Brown hit his approach on the 18th to about 60 feet, left his putt about 10 feet short and three-putted for bogey. Gore needed to make a 50-foot birdie putt on 18 to force a playoff, but he left it about a foot short to wrap up the victory for Love.

There was quite a crowd near the top of the leaderboard for a while. Midway through the afternoon, five players shared the lead at 15 under.

None of them was Woods.

Chasing his first victory since 2013, he opened with six straight pars, including one on the easiest hole on the course – the par-5 fifth, which he birdied in each of the first three rounds.

Woods sent his tee shot on the par-3 seventh into the huge gallery that had been waiting for him to reel off some birdies and make his move, then two-putted for his first bogey.

And when he made the turn, he was three strokes behind co-leaders Gore and Brown – his playing partner.

His chip-and-run ran all the way off the green. He couldn’t keep his ensuing chip on, and wound up three-putting for triple bogey. Not even three straight birdies on Nos. 13-15 could help him recover.

“I just wasn’t able to get any kind of roll early,” Woods said. “I had my chances to get it going. I just never did.”