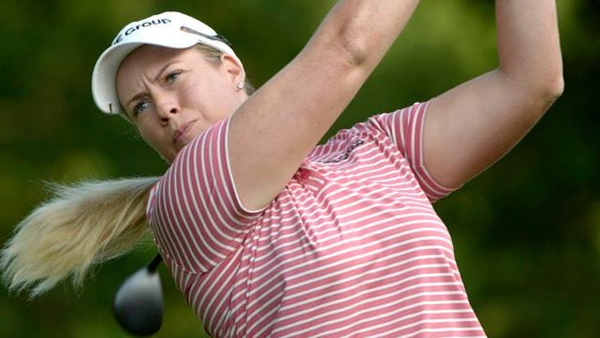 EVIAN-LES-BAINS, France – Brittany Lincicome had six birdies in a 6-under 65 to take a one-shot lead from Hyo-Joo Kim of South Korea at the halfway stage of the Evian Championship on Friday.

The 28-year-old American has won a major before, the Kraft Nabisco in 2009, but clinched the last of her five LPGA titles in 2011 at the Canadian Women’s Open.

“Even when I felt like I didn’t hit a good shot today I kind of got away with it,” she said. “Golf isn’t always a perfect game and hitting great shots.”

She finished second behind South Korea’s Inbee Park at this year’s LPGA Championship, when she also led after 36 holes.

“At this point I would take any win. It’s been a while,” Lincicome said. “When I’m playing well, it’s just kind of light and easy and just having a good time, going with the flow, and not paying attention to the leaderboard.'”

Lincicome’s relaxed frame of mind is down to an unusual practice technique – whereby she hits balls bare-footed on the driving range.

It may seem eccentric, but the reason is to stop her driving too hard.

“It just slows it down, my tempo. Obviously I can’t swing as hard as I would like to with no shoes on because I will fall,” she said. “It makes me swing a lot slower, which is really good for me. With a driver I tend to want to hit it really hard, and with no shoes on I can’t do that.”

This has not gone unnoticed.

“It’s funny, because (U.S. player) Laura Diaz came over to the range,” Lincicome said. “She’s like, `Two questions: Why are you practicing and why don’t you have your shoes on? Because a lot of players know I don’t like to practice.”

Park, meanwhile, is tied for 20th at 1-under and drifting out of contention for a sixth major.

The day after making history with the lowest ever score in a women’s or men’s major with a 10-under 61, Kim had four bogeys and rescued her round with three birdies on the back nine – including a 35-footer on the last hole.

Countrywoman Mi-Jung Hur is three shots behind Lincicome, while veteran Karrie Webb of Australia and defending champion Suzann Pettersen of Norway are four shots back. The 39-year-old Webb is chasing an eighth major – her last was the Kraft Nabisco in 2006 – while Pettersen is eyeing a third.

One shot behind them are No. 1-ranked Stacy Lewis of the U.S., 17-year-old Lydia Ko of New Zealand and Thailand’s Moriya Jutanugarn.

Lincicome also has an outside chance to also win the inaugural Rolex Annika Major – named after retired Swedish great Annika Sorenstam and honoring the player with the best overall record in the five majors.

Players have to win a major to qualify, however.

Michelle Wie, the U.S. Women’s Open champion, leads the standings with 84 points but she withdrew during Thursday’s first round with a recurrence of her right index finger injury.

Lincicome, who had three birdies each on the front and back nine, is eighth with 24 points and now needs results to go her way.

So-Yeon Ryu, the 2014 Canadian Pacific Women’s Open champion, was disqualified for a breach of the rules.

After she damaged her putter by slamming it against her shoe and bending the shaft, she subsequently used it to tap the ball in. But it is forbidden to use a club that was damaged other than in the normal course of play.