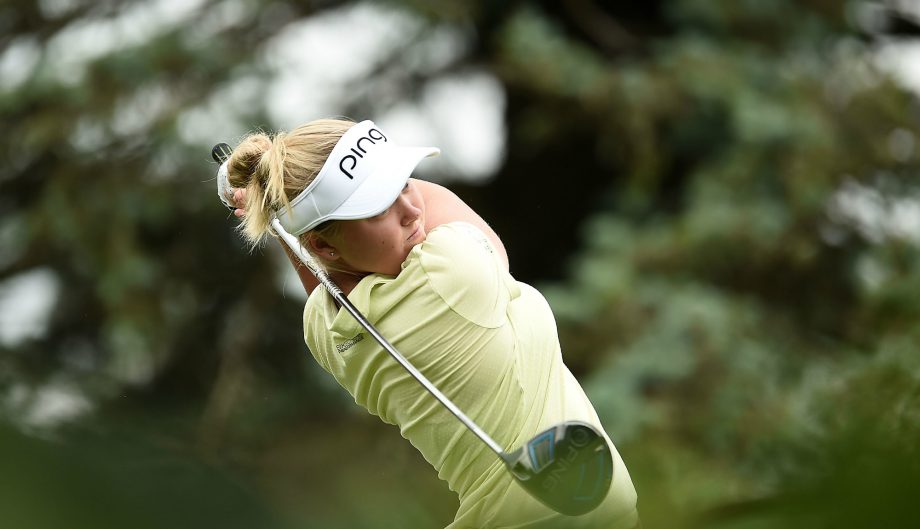 Lexi Thompson shot a 64 on Saturday on the Blythefield layout reduced to a par of 69 because of flooding, giving her a one-stroke lead in the Meijer LPGA Classic.

The fifth hole was played as a 111-yard par 3 instead of a par 5 because of the flooding from overnight rain.

Coming off a playoff loss to Ariya Jutanugarn last week in Canada, Thompson had six birdies – four on the back nine – and a bogey to reach 15-under 196.

“It was just a matter of staying patient,” Thompson said. “I knew I was hitting it well on the front nine, I just wasn’t making the birdies. But I hit it well all day, so it was all a matter of hitting the shots closer and I guess just taking advantage of like No. 11, reaching that one in two, and making a few putts for birdie.”

Her only bogey was on the par-4 seventh.

“It was just a stupid club coming in,” she said. “I should have just played short of the green, that’s where you have to miss it, and I hit it long. Just a bad miss, stupid mistake.”

"It's actually probably a little bit easier going into Sunday being one shot back." @BrookeHenderson interview: #MeijerLPGA pic.twitter.com/GnQlphWRz4

Thompson won the Kingsmill Championship last month in Virginia for her eighth LPGA Tour title after losing the ANA Inspiration in a playoff after being penalized four strokes for a rules violation reported by a television viewer.

At Rancho Mirage in early April, Thompson was given the four-shot penalty with six holes to play in the final round. She had a 15-inch putt on 17 in the third round when she stooped to mark the ball, and quickly replaced it about an inch away. The television viewer contacted the LPGA Tour the next day, and officials determined it was a clear violation.

Henderson birdied Nos. 12 and 13 and closed with five pars.

“I made that long one from off the green on 12 that wasn’t really expected and that kind of gave me some energy,” the 19-year-old Canadian said.

“My irons were really good,” the South African player said. “Obviously, all the par 3s, that helps. I was looking at birdie almost every hole, which is quite nice. I was never really in trouble except on 10, I missed the drive left, but that was really the only thing. There were a couple of long putts I made, unexpected putts actually. ”

Shin made a long putt on No. 14 for her fifth straight birdie. But on 17, she pushed her approach shot and wound up on the bottom of the green, and took her only bogey of the round.