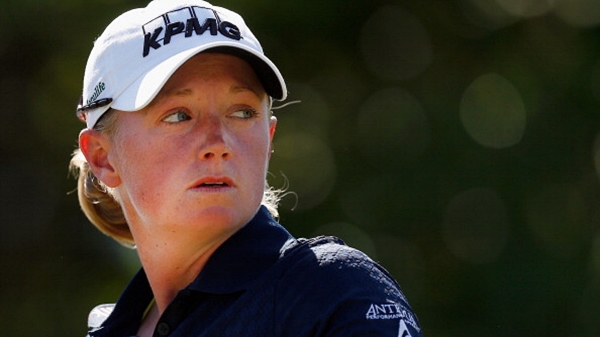 IRVING, Texas – Stacy Lewis was holding her 3-year-old nephew after a frustrating round when someone asked the little boy what his aunt could do better.

Aunt Stacy, who had whispered the response into his ear, wholeheartedly agreed.

Missing several makeable putts Saturday, including a birdie chance on the 18th hole, Lewis shot a 2-under 69 to grab a share of the lead with South Korea’s Meena Lee after three rounds at the North Texas LPGA Shootout.

“I hit the ball so good today, especially on the back nine, gave myself a lot of good looks at birdie, and I couldn’t get a putt to go in,” Lewis said. “I had so many that they just went right over the top edge and finished right behind the hole. … The encouraging thing is that I’m hitting the ball great. I have a lot of control over the different shots I’m trying to hit.”

Lewis, the third-ranked player in the world, dropped her head when the final birdie chance rolled just left of the hole after getting over the green at the 518-yard, par-5 18th in two shots. The Texan matched Lee at 9-under 204.

In nearly ideal scoring conditions with little if any wind, Lee shot 70 with plenty of near-misses, too.

“It definitely is going to be the putting,” Lee said about what she needs to do Sunday to get her first win since 2006. “I didn’t really take advantage of a lot of birdie chances today, so I want to make more birdies tomorrow and see how it goes.”

First-round leader Suzann Pettersen, Dori Carter and Julieta Granada shot 68 and were a stroke behind the leaders.

Cristie Kerr (69), Christina Kim (70) and Natalie Gulbis (71) were among seven players tied at 7 under and only two strokes off the lead. Also in that group was 22-year-old Jennifer Johnson, who had an opening bogey before shooting a 65 for the best round of the day at Las Colinas Country Club.

But Caroline Masson, who shared the second-round lead with Lee, followed consecutive 67s with a 75 to fall five strokes back.

Lewis is an eight-time LPGA Tour winner, but has had six runner-up finishes in 18 starts since winning the Women’s British Open in August. She finished worse than sixth only once in the first eight events this year, including second in San Francisco last week.

After a bogey-free 64 with only 26 putts in the second round, Lewis hit all 18 greens in regulation Saturday – even while hitting only seven of 13 fairways. But she needed 34 putts.

“It’s golf. As many rounds as we play, you know, you’re going to hit some putts that you think are going to miss and they end up going in,” she said. “It’s just the way it is sometimes, and the thing about it is that I hit my lines. I hit it the right speed. You know, it wasn’t like they were going way by the hole or anything. They were just tap-ins coming back.”

Lee had the lead alone at 10 under after consecutive birdies. The second of those birdies came after an approach to within a few feet at the par-5 seventh hole, and was her last of the day.

On the par-3 13th hole, Lee was still 10 under when her tee shot went over the green and she pitched past the hole before a par-saving putt. Lewis then had a birdie chance slide just past to hole to remain a stroke back.

Lee’s approach at the 416-yard 14th hole settled near a scoring tower by the green and a par putt came up just short of going in the hole. Lewis got even, though she looked up in frustration when a birdie chance for the outright lead rolled just right of the hole.

“I’m doing a lot of good things. The encouraging thing is that I’m tied for the lead,” Lewis said. “Even with all the missed shots today, I’m still tied for the lead and I have a chance for tomorrow.”

Inbee Park, the No. 1 player in the world and the defending champion, shot 68 and was only three strokes back.

Alena Sharp and Lorie Kane both had exceptional rounds Saturday and are tied for 18th at 4-under 209 heading into the final round. Sharp carded a 5-under 66 Saturday, while Kane had a 4-under 67.

When the initial cut was made at 2 over after the second round, 74 of the original 144-player field made it. There was another cut after the third round, with 51 players advancing to Sunday at even par or better.