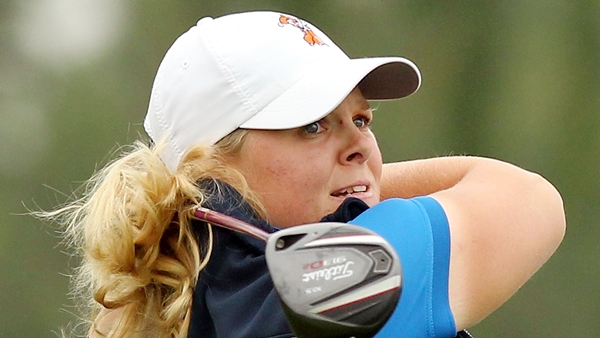 BEIJING – Stacy Lewis recovered from a slow start with four birdies on the back nine Saturday to take a share of the lead with Sweden’s Caroline Hedwall heading into the final round of the LPGA Reignwood Classic.

The top-ranked Lewis started the day with a two-stroke lead over fellow American Brittany Lang, but fell back with three bogeys through the 11th hole. She then made three straight birdies from No. 13 before closing with a birdie on the 18th to regain a share of the lead with a 72.

“I made some bad swings early,” Lewis said. “Probably the swing I made on 13, on the par 3, I don’t know what it was, but things just kind of seemed to click after that. You know, just kind of found some confidence in my golf swing from there, and then making the putts too, which was nice.”

Hedwall made five birdies on the back nine to shoot a 5-under 68. She will be aiming for her first career LPGA title on Sunday, while Lewis will be trying to win her fourth this year.

“I put myself in the position a few times but just haven’t won yet,” the Swede said. “When I go out there tomorrow I’m trying to just be patient and be relaxed about it though, because you can’t force anything when you’re playing golf.”

Hedwall and Lewis were at 13-under 206 at Pine Valley Golf Club.

Lewis said another title would also help put distance over her closest rivals in the race for LPGA player of the year.

“A win this week would help that a lot,” she said. “I don’t think I’m comfortable until the last tournament and nobody else can beat me. It’s one of those things I don’t think you get too comfortable with. The players behind me are great players and can win two tournaments in a row pretty easily.”

Second-ranked Inbee Park of South Korea stayed in contention Sunday with a 68. She’s tied for fifth with Germany’s Caroline Masson (71) at 10-under 209.

“I had really nothing to lose really today,” Park said. “I was in the middle about 12th or 15th place. I had to make some kind of move today to have a chance tomorrow.”