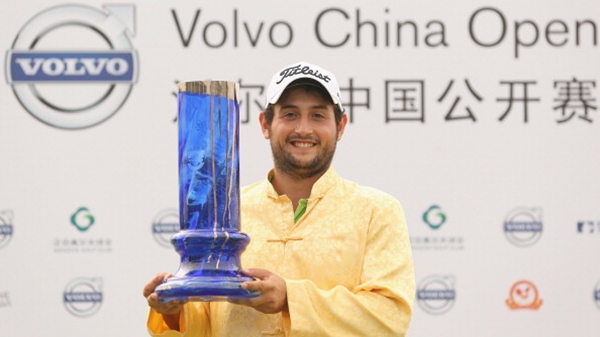 SHENZHEN, China – Alexander Levy was so relaxed on the course at the China Open on Sunday, not even a double bogey that erased his comfortable lead could wipe the grin from his face.

Rather than get down over what could have been a costly mistake, the 23-year-old Frenchman recovered with back-to-back birdies on his final two holes to capture his maiden European Tour title by four strokes over Tommy Fleetwood.

The smile, he said, was the key to victory.

Levy, playing in just his second year on the tour, vaulted into the lead with a career-best 10-under 62 in the second round and looked to be headed for a runaway victory after making a birdie on the 13th Sunday to extend his lead to five shots.

But then he ran into trouble on the par-4 15th. After hitting his approach shot well past the green, he putted from the fringe and sent the ball off the other side of the green. He chipped back to the green and two-putted for a double bogey, allowing Fleetwood back within two strokes.

Fleetwood, playing in the group ahead of Levy, then tightened the pressure further with a birdie on the par-5 17th to pull another shot back.

Levy responded, however, with a flawless 3-iron approach shot over a lake on the same hole to set up a three-foot birdie putt.

“I just closed my eyes and got one of the best shots of the week to the green,” he said.

After Fleetwood bogeyed the 18th, Levy sealed the win by dropping another perfectly placed approach shot three feet from the pin for another birdie. He shot a final-round 69 for a 19-under 269 overall.

“We aim for wins, but today I didn’t really have a chance. I had to play outstanding golf, but Alex has led from Friday, and that’s one of the hardest things you can do,” Fleetwood said. “What a performance from him.”

Levy has faltered under pressure before. Last year, he was tied with Ernie Els entering the final round of the BMW International Open in Munich but let the title slip away with four bogeys on the back nine. He ended up in third, his previous best result on the tour.

Since then, however, he said he’s been inspired by the success of his good friend and compatriot, Victor Dubuisson, who beat Tiger Woods to win his first European Tour title at the Turkish Airlines Open in November and then was runner-up to Jason Day at the Match Play Championship in February.

The other French players have given him plenty of encouragement as he chased his first tour victory this week, too.

Dubuisson has sent him text messages throughout the week, and the French contingent in Shenzhen doused him with celebratory champagne after he sank his final putt on the 18th.

“We have some great players in France, both young and old, and we all have a great relationship,” Levy said. “There are some very good players and have been some great wins for Victor, Julien Quesne, Greg Bourdy, Raphael Jacquelin over the past couple of years which is great for French golf and great with the Ryder Cup coming to France in 2018.”

Fleetwood was second at 15 under and Alvaro Quiros of Spain was third, another two strokes back.

No. 3-ranked Henrik Stenson, who was bedridden with the flu earlier this week, finally put together his first solid round of the tournament, with seven birdies and no bogeys for a 65. The Swede improved to joint fifth place but still fell short of the win he needed to overtake Tiger Woods at the top of the world rankings.

PGA champion Jason Dufner opened with a birdie-eagle on his first two holes before slipping back to joint 54th with two double bogeys and a triple bogey on the 17th.