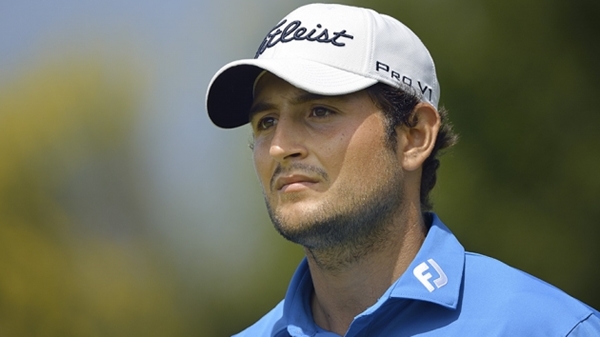 SHENZHEN, China – Alexander Levy of France shot a career-best 10-under 62 to open a four-shot lead after the second round of the China Open on Friday.

Henrik Stenson tried to keep alive his chances of taking over the No. 1 world ranking with a 70 to sit at 3 under overall, 11 shots behind Levy. The Swede can nudge Tiger Woods out of the top spot with a win here.

Levy, whose best finish on the European Tour was third place at last year’s BMW International Open, sunk a 20-foot eagle putt on the ninth hole to cap a front-nine 30.

He then birdied four more times on the back nine to finish at 14-under 130, four shots clear of Spaniard Adrian Otaegui in second.

“I played unbelievably,” Levy said. “I shot 63 at Kingsbarns during the Dunhill Links in Scotland last year, but this course is a lot tougher and I am only starting to realize how good that score is.”

Ian Poulter, meanwhile, saw a promising round fall apart on a disastrous par-5 13th hole where he was assessed a two-stroke penalty for playing from the wrong spot after hitting into dense foliage and incorrectly measuring his own drop. He took a triple-bogey and ended up with a 74, still good enough to make the cut.

The cut was at par, which U.S. PGA Championship winner Jason Dufner barely made after shooting a 71.

The 15-year-old Chinese amateur Guan Tianlang, however, was sent home after a 76. He’s only made one cut on the U.S. PGA and European Tours after his sensational debut at the Masters last year, when he became the youngest player to complete 72 holes.

Levy began his climb up the leaderboard in the Thursday twilight when most golfers were already in the clubhouse or long gone. Playing in one of the last groups, the Frenchman was tied for the lead but bogeyed the eighth hole in the faltering light before play was finally suspended.

“It was tough because it was dark and I made some bogey and I wasn’t happy in my bed last night,” he said. “I just focused on finishing the first round well this morning and continuing this afternoon.”

Levy was a newcomer to the tour – he gained his playing card only last year – but he’s been in these types of high-pressure situations before. He had a share of the lead with Ernie Els heading into the final round of the BMW International Open, but faltered with four bogeys in Sunday’s opening nine holes.

He said he’s been inspired by the recent performance of his good friend and fellow Frenchman, Victor Dubuisson, who held off Tiger Woods, Stenson and Poulter to win his first European Tour title at the Turkish Airlines Open in November.

“What he has done over the past few months has been amazing and it has really had an effect on all the French players, so hopefully I can try to emulate that,” Levy said.

If he stumbles, Stenson is close enough to make a move.

The No. 3-ranked Swede is on the mend after coming down with the flu this week, which prevented him from practicing before Thursday’s opening round. He said he felt better that night but then woke up on Friday weak and tired again.

Still, he believes he’s playing well enough to challenge the leaders this weekend.

“I made six birdies out there today and missed a few good opportunities to make more,” he said. “But then I threw a silly double in there and a few bogeys as well so I need to cut that out.”

“We make mistakes, I guess, and that was a fun one,” he said. “Guess I need to get the rulesbook back out and start chewing it.”

Dufner is happy just to be sticking around for the weekend after curling in a 15-footer for birdie on No. 6 and scrambling to make par on No. 9, his final hole.

“It’s been a struggle all year for me, so far, with scoring,” he said. “Luckily I play a lot of the tougher events so you don’t have to shoot a lot of low scores, but guys are shooting pretty good scores out here.”