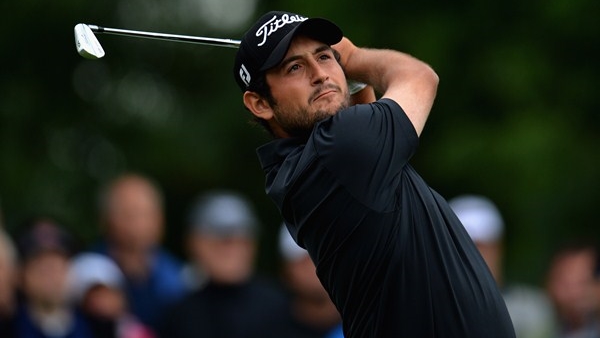 SHENZHEN, China – Alexander Levy of France overcame driving rain and gusting winds to shoot a 2-under 70 at the China Open on Saturday and maintain a three-stroke lead over Alvaro Quiros of Spain heading into the final round.

Levy, aiming for his first European Tour title, birdied three straight holes on the back nine, but opened the door for Quiros with bogeys on No. 14 and 16. The Spaniard couldn’t close the gap, however, making two bogeys of his own down the stretch.

Finland’s Mikko Ilonen was four strokes back in third place after a 67, while England’s Tommy Fleetwood (67) and Spain’s Adrian Otaegui (71) were another stroke behind in a tie for fourth.

A day after 15-year-old Chinese amateur Guan Tianlang failed to make the cut, another young homegrown talent, 18-year-old Li Haotong, shot a 67 to match the low score of the day and jump into joint eighth at 7 under.

Third-ranked Henrik Stenson, however, didn’t make up any ground on the leaders, falling 12 shots behind after shooting a 71. The Swede needed a win here to take over the top ranking from Tiger Woods – a goal that now appears well out of reach.

Levy wasn’t nearly as accurate as he was on Friday, when he holed a 20-foot putt for eagle and sunk eight birdies en route to setting a new course record at Genzon Golf Club. But he handled the nasty weather at the start of his round and maintained his focus after his late bogeys, managing to avoid a third with a 15-foot putt for par on the 18th.

The Frenchman knows he will face a lot more pressure on Sunday, even with a three-stroke cushion. Last year, he was tied with Ernie Els for the lead heading into the final round of the BMW International Open, but committed four bogeys in his last nine holes to slip to third.

“I will be nervous, but because you’re nervous doesn’t mean you can’t play well,” he said. “I’ll sleep nicely because I’m tired. It was a long day with the weather and difficult golf course.”

Quiros has six European Tour titles to his credit but hasn’t gotten a win – or even a top-three finish – since his title at the Dubai World Championship in November 2011.

“If Alex plays really well then we might not be able to catch him,” he said. “It has been two and a half years since I won so I have not had those feeling for a long time.”

With the leaders so far ahead, Li is playing for another goal – a big payday. The golf club has pledged to double the purse for any Chinese player finishing in the top five.

While Guan has received most of the attention in China after his breakthrough performance at last year’s Masters, where he became the youngest player to make the cut, Li is perhaps better poised to make an immediate impact on the game.

Last year, he signed an endorsement deal with Nike and played remarkably well against elite fields at the HSBC Champions and BMW Masters in his hometown of Shanghai, finishing tied for 39th and 42nd, respectively. And after practicing on the Genzon Golf Club course for the last two months, he’s close to his first top-five finish.

“I’m very happy. I want to keep that name on the leaderboard,” he said.

England’s Ian Poulter also shot a 67 Saturday to move up to equal 11th place. But Poulter said he was still smarting from a two-stroke penalty he incurred on the 13th hole Friday when he improperly measured his drop after hitting into the rough. He took a triple-bogey 8 on the hole, following a double bogey on the 12th.

“I shouldn’t be happy with the position I’m in. I dropped five shots yesterday in two holes. It’s unacceptable. It’s disgraceful,” he said. “I should be a lot closer to the lead, but that’s golf. You can’t have it perfect all the time.”