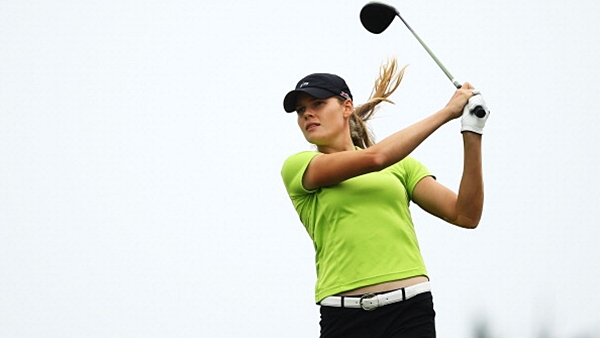 LAKE WALES, Florida – Maude-Aimee LeBlanc of Sherbrooke, Que. shot an even-par 72 in the second-round of the Florida’s Natural Charity Classic Saturday to remain at 5-under-par for the tournament and maintain a one-stroke lead.

LeBlanc got off to a strong start with a birdie on the first hole.  She made four total birdies on the front nine to move to 8-under for the tournament at the turn.

The tides turned on the back nine quickly when she made bogey on the tenth hole.  After three straight pars, LeBlanc made double bogey on the par-4 14th hole.

“It was not as good as yesterday, I didn’t make as many putts,” said LeBlanc.  “The greens were very tough to read again and I just made a couple bad swings on the back nine and it cost me a double bogey on 14.”

LeBlanc finished her round with four straight pars to stay at 5-under-par for the tournament.

“Even par is not that bad and I’m still in contention, so I can’t be too disappointed.”

LeBlanc, who led by two strokes after day one, will take a slim one stroke lead into Sunday.

“I’ll just try to focus on what I do best and keep a good tempo, today I struggled a bit with my tempo and my swing,” said LeBlanc, a former Team Canada member who won a National Championship with Purdue in 2010.  “Tomorrow, I need to just stay relaxed and smooth and just play as if I was playing back home.”

The recipe for her first tournament win in her first Symetra Tour event will be simple.

“If a can drop a couple putts, I’ll be in good shape.”

Jackie Stoelting, Karlin Beck and Yueer Cindy Feng are tied for second at 4-under-par for the tournament.

The cut was made at 6-over-par.  A total of 76 players made the cut and will play on Sunday.