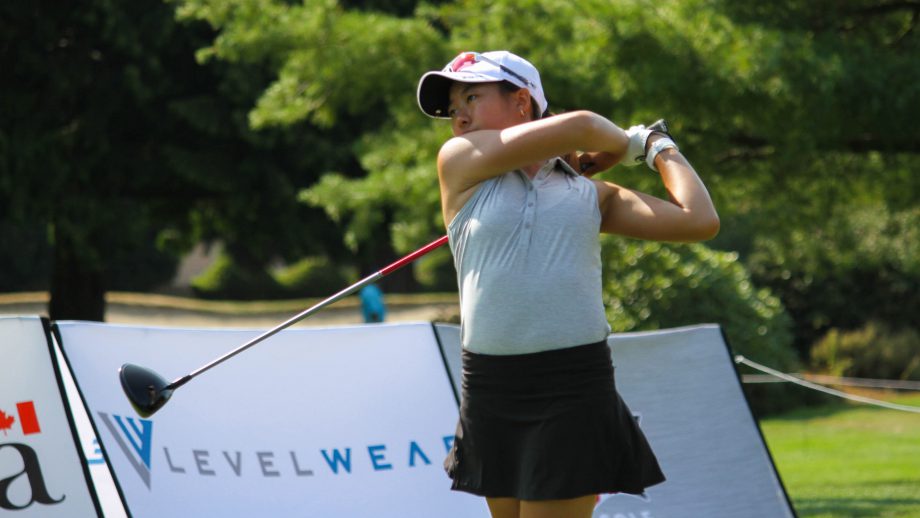 TSAWWASSEN, B.C. – Lauren Kim carded a 3-under-par 69 to lead by one stroke after the first round of the Canadian Junior Girls Championship at Beach Grove Golf Club.

After playing the third round of the Canadian Women’s Amateur Championship at Marine Drive in B.C. last week with a bug bite on her arm causing her pain to bend her arm; Kim was healthy and bug bite free heading into the first round on Tuesday.

The 12-year-old carded four birdies and one bogey to jump in front of Céleste Dao who had the clubhouse lead after the morning wave.

“I didn’t hit a lot of fairways today, it was actually hard, my swing was off, and I was just trying to par my way in, I was like try to keep it even, make your pars and do what you can,” said the Surrey, B.C., native. “I had a good start to my back nine, I started with a birdie and hit more fairways, it was easier.”

Kim has already tasted the winners circle this season, after she played up a division – against girls 15-18 years old – winning the Maple Leaf Junior Golf Tour’s Ford Seres Tournament in May and was T5 at the Future Links, driven by Acura Pacific Championship later that month.

Céleste Dao, member of the Team Canada Development Squad, came in with a 1-under-par 71, to sit one stroke back of Kim.

“My birdies came mostly on the par 5s. I was reaching them in two or doing up and downs from the bunkers. Otherwise, I was sticking it close to the pin with my wedges on the other holes I birdied. I did have one chip-in.” said the Notre-Dame-de-l’Île-Perrot, Que. native.

Dao – the 2018 Mexican Junior Girls Champion – was two under on her front nine. When she made the turn she recorded two bogeys, then two birdies to recover, but fired one last bogey on hole 16 to finish her round 1-under.

“You have to take advantage of the par 5s. You just need to be patient, there are some holes that may look like they are birdie opportunities, but you need to identify the holes where you need to play safe,” said the 17-year-old. “The front nine is tighter for the drives, the back nine is longer and I think the greens are harder on the back nine, more elevation.”

Emily Zhu from Richmond Hill, Ont. and Hannah Lee from Surrey, B.C. both came in at even par 72.

Zhu sat tied with Dao at 1-under throughout her entire round until she recorded a bogey on her last hole to finish T3.

Team Quebec is leading the inter-provincial team competition at even par and defending champions, Team B.C., sit in second at 6-over-par.

Click here to view the full leaderboard for the 2018 Canadian Junior Girls Championship.