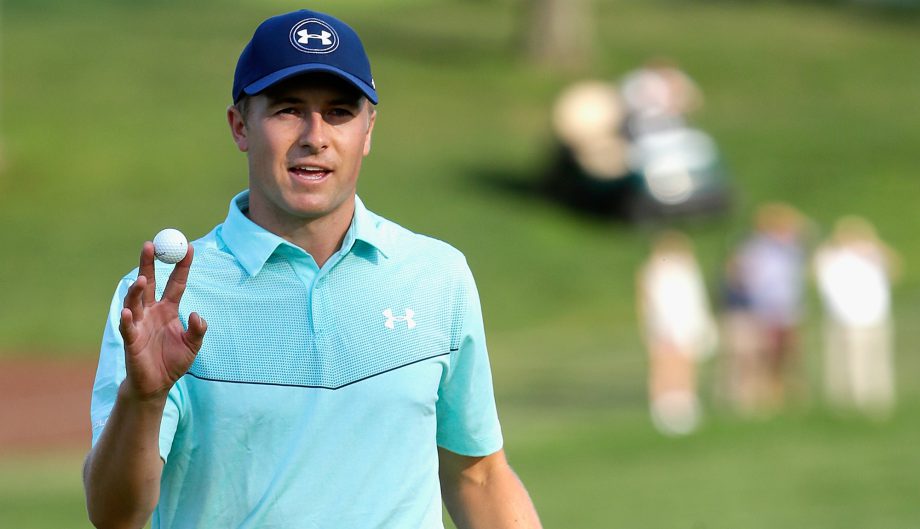 Jordan Spieth needed only three holes to leave a strong cast of challengers wondering what it’s going to take to catch him in The Northern Trust.

Spieth ran off three straight birdies on the back nine at Glen Oaks Club and finished with a pair of pars for a 6-under 64, matching the low score of the tournament and building a three-shot lead over Dustin Johnson.

It was the second straight day that Spieth filled his card with birdies on the easier back nine at Glen Oaks – a 30 on Friday, a 31 on Saturday.

Not a bad day at the office for @JordanSpieth. pic.twitter.com/amNsrIxH8M

Johnson, his regular partner at the AT&T Pebble Beach Pro-Am, failed to take advantage until he stuffed his approach into 4 feet on the 18th hole for a birdie and a 67 to narrow the gap and get into the final group with Spieth.

“Ten except for one hole,” he said with a smile, referring to the quadruple bogey he made on the 12th hole at Augusta National that cost him the 2016 Masters.

Paul Casey, who seems to play his best golf this time of the year, and defending champion Patrick Reed each hat a 66 and were next in line at five shots back, along with Jon Rahm (67) and Matt Kuchar (68).

Mackenzie Hughes of Dundas, Ont., the lone Canadian left in the field, shot a 73 for a share of 52nd place.

Missing from the mix are Jhonattan Vegas and Rickie Fowler, who started the third round as part of the four-way tie for the lead that included Spieth and Johnson. Vegas shot a 72 to fall eight shots behind. Fowler, playing with Spieth, opened with five bogeys in six shots and fell 10 shots behind after a 74.

“A five-shot lead requires two things – a really good round from whoever is coming from behind and the leader to stumble a little bit,” Rahm said. “And Spieth is not known for being one to stumble.”

Spieth lost a three-shot lead in four holes at the British Open last month, and he lost the lead with five holes to go until he answered with one of the strongest finishes in major championship history to win at Royal Birkdale. A month before that, he struggled badly with his putter in the final round at the Travelers Championship until he won in a playoff by holing a bunker shot.

What he would love on Sunday is the kind of boring round he put together at Pebble Beach – two birdies, no bogeys, no excitement, a four-shot victory.

“I don’t expect it, though,” Spieth said.

He didn’t have reason to believe he would have a three-shot lead when the third round began with so many players in the mix. Johnson took the early lead with a birdie from the bunker on the par-5 third hole, and then Spieth began the first of two big runs. He holed birdie putts of 20 feet, 12 feet and 25 feet over a four-hole stretch, and looked as though the lead would get even bigger when he settled over an 8-foot birdie chance on the ninth hole.

And then he three-putted with an aggressive stroke on a downhill putt. Spieth bounced back with a birdie on the 10th, and then after failing to birdie the lone par 5 on the back nine, he went back to work with the putter with a 10-foot birdie on No. 14, a 20-foot birdie on the par-3 15th and a shot into 4 feet on the 16th for three in a row.

Johnson stopped hitting it close and twice had to work hard not to lose ground.

• Start the day tied for the lead
• Shoot 67
• Finish three off the pace pic.twitter.com/RIX9N6YI06

At three shots behind, he still looms as a big threat as the No. 1 player in the world whose game is rounding back into the form that made him appear to be so unbeatable until his back injury before the Masters.

“Let’s be honest here – I’d rather have a three-shot lead,” Johnson said. “But it’s not that bad coming from three shots back, either, because that can change in one hole, really. But obviously, Jordan is playing really well, so he’s going to be tough to beat tomorrow. … If I can drive it well again tomorrow and maybe hole a couple putts, maybe some of his putting will rub off on me and I’ll start holing them.”

Spieth will be going for his fourth victory of the year, one that would make him the front-runner for PGA Tour player of the year.