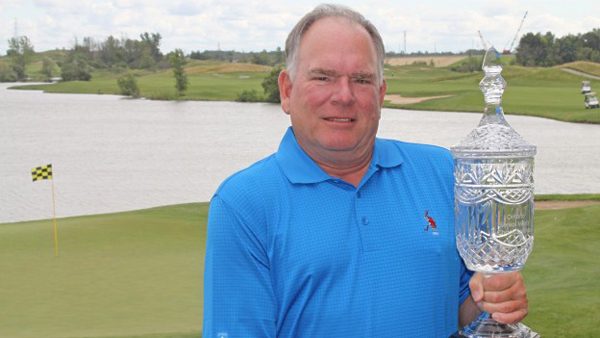 WELLAND, ON – It was a crowded leaderboard heading into the final round of the Golf Association of Ontario’s (GAO) 2014 Investors Group Ontario Senior Men’s Amateur Championship as three players entered the day with a share the lead, while nine others were all within three shots.

Conditions were windy at Hunters Pointe Golf Course in Welland for the final round on Aug. 14. First-round leader and co-leader after the second round, Oakville’s Larry Cooper was able to tame those conditions to play great golf and capture his first Ontario Senior Men’s Amateur Championship.

“I came down early and played a practice round with Sandy Billyard, who co-owns the course and I really got to learn a lot about it,” said Cooper. “The wind makes a huge difference on this golf course and you really need to pick the right club and I seemed to do that today. I tried to keep the ball down in the wind and made sure I was finishing low at the target.”

Cooper attributed much of his success during the week to his flat stick.

“My putter was really solid. I made a lot of good putts, putts for par when I needed to, so I was very pleased with that.”

Cooper, 57-years-old from the Mississaugua Golf & Country Club, took the outright lead after a birdie on the third hole. He would par the remaining six on the front nine and was at one-under at the turn. He continued to play well on the back nine beginning with a trio of birdies on the 10th, 11th and 12th holes. He would go on to finish the round four-under (68) and four-under for the tournament.

“The senior group is a great group of guys. Everyone is pulling for each other, which is really nice. I love the spirit of they have to offer.  Last year, I played the event and lost in a playoff, this year I was lucky enough to win and it feels really nice to come back and win it.”

Finishing second was Lars Melander from the Hidden Lake Golf Club. The Oakville resident finished the final round three-over (75) and the tournament at three-over. Melander had a rough start to the day and was five-over through 15 holes. However, he would birdie 16 and 18 to claim the silver medal. Melander also was crowned champion of the 60+ Division.

Rounding out top three were Pickering’s Christopher Kertsos and Collingwood’s Michael Jackson who both ended the tournament at six-over. For Kertsos, he finished the day at three-over (75). As for Jackson, he was six-over (78).

Georgetown’s Reg Finlayson captured the 70+ Division, for the third consecutive year, with a final round of six-over (78) to end the tournament at 17-over.

With their podium finish Cooper and Melander earned the right to represent Ontario at the Canadian Senior Men’s Championship, Aug. 26-29 at Capilano Golf & Country Club in West Vancouver, B.C. Brampton’s Rick Dobbs-Hebron joined them after earning the third spot in a playoff.

For more information and the final leaderboard, click here.