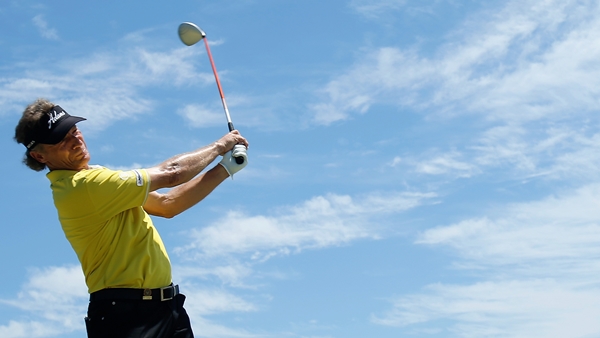 The 56-year-old has three victories this season and won the most recent event, the Senior Players Championship. He has everyone’s attention as he heads into the U.S. Senior Open at Oak Tree National, starting Thursday.

“He’s as good as the German football team are, which is ridiculously good,” Montgomerie said of the team that advanced to the World Cup championship match after a 7-1 rout of Brazil.

Langer also has three runner-up finishes and 11 top 10s in 12 events. He has 2,362 points in the race for the Charles Schwab Cup; the second-place golfer, Jay Haas, is 882 points behind.

Langer is playing some of the best golf of his career.

“Well, the whole game has been pretty solid,” Langer said. “I’m hitting it pretty decent from tee to green and the putter is maybe a little bit better this year, just a fraction, than in previous years. It shows in the scores.”

Langer said Oak Tree is a good and difficult course.

“I would think it’s the hardest course I have ever played, or one of the hardest courses, the way it’s set up right now,” he said. “It’s just extremely demanding. And if the wind blows on top of that, it’s going to make it even harder.”

Langer will have competition. Kenny Perry, the defending U.S. Senior Open champion, has won three of the previous six senior major championships. Those victories give him confidence heading into the Senior Open.

“I look forward to the major tournaments now because I can be a little more aggressive,” he said. “I feel like I’m a lot more competitive and I have a lot more confidence. When I come in each week, I’m expecting to win. I may not win and I may not even make the cut, I don’t know, but I feel good mentally as I approach these events.”

Scott Verplank turned 50 on Wednesday, reaching the age requirement by one day. The Edmond, Oklahoma, resident has finished in the top 10 in every major professional championship event. Though he has the advantage of playing this event on his home course and he will be the youngest in the field, he doesn’t expect an easy time.

“These guys can still flat-out play,” Verplank said. “I’m not going to able to just roll out of bed and show up on the first tee and expect to beat everybody. I’m going to have to play at a very high level to compete.”

Vijay Singh will make his second start on the Champions Tour. The 51-year-old previously played in the 2013 Pacific Links Hawai’i Championship, where he tied for sixth. He won 34 PGA Tour events, including three majors.

Irwin, the only two-time Senior Open winner in the field, would tie Jack Nicklaus for the career record of eight senior major titles with a victory.

Even with all the big names, most of the pre-event chatter has focused on Langer.

“It’s fantastic to see that someone can actually, in my book, improve over 50,” Montgomerie, who is third in the points standings, said. “There are very few guys in the world that can improve over 40. Bernhard Langer appears to be improving over 50. That’s a real compliment to say. So of course he’s the guy to beat.”