Langer to be aggressive in Champions Tour finale 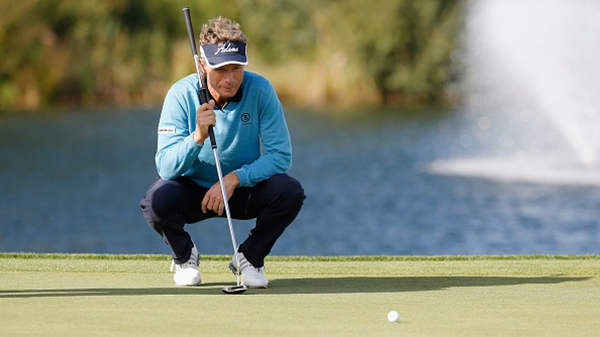 The 57-year-old German star wrapped up the Charles Schwab Cup points title Sunday in San Antonio, taking a lot of the drama out of the season-ending event that begins Thursday at Desert Mountain.

“In the past, I was always either leading or second or third and there was still a lot to play for,” Langer said Wednesday. “There’s still a lot to play for because we’re playing for a lot of money, but the Charles Schwab Cup is wrapped up and that’s great news for me. So, I can go out there and play as aggressive as you’ll ever see me play probably because I have nothing to lose at all and everything to gain.”

Langer has a tour-high five victories – two of them majors – and also has wrapped up the season money title with $2,916,189. He has 23 career victories on the 50-and-over tour.

“It’s been a very incredible year for me,” Langer said. “I’m at a great place in life right now. Everything is good at home. I’m healthy and enjoying my game, have a great coach, good caddie and everything, good family. My oldest daughter is getting married next weekend, so a lot of good things going on. I’m very grateful and very blessed.”

The top 30 on the money list qualified for the tournament.

Colin Montgomerie is second in the Schwab Cup standings and the money list. He also has two major victories this year.

“It’s my first full year out here and it’s been a delight,” Montgomerie said. “I’ve been made very welcome by everybody, by fans and by players and everyone alike, and then all the volunteers on this tour. It’s a great place I play and I enjoy it thoroughly.”

The shiny trophy caught his eye Wednesday at the Cochise Course.