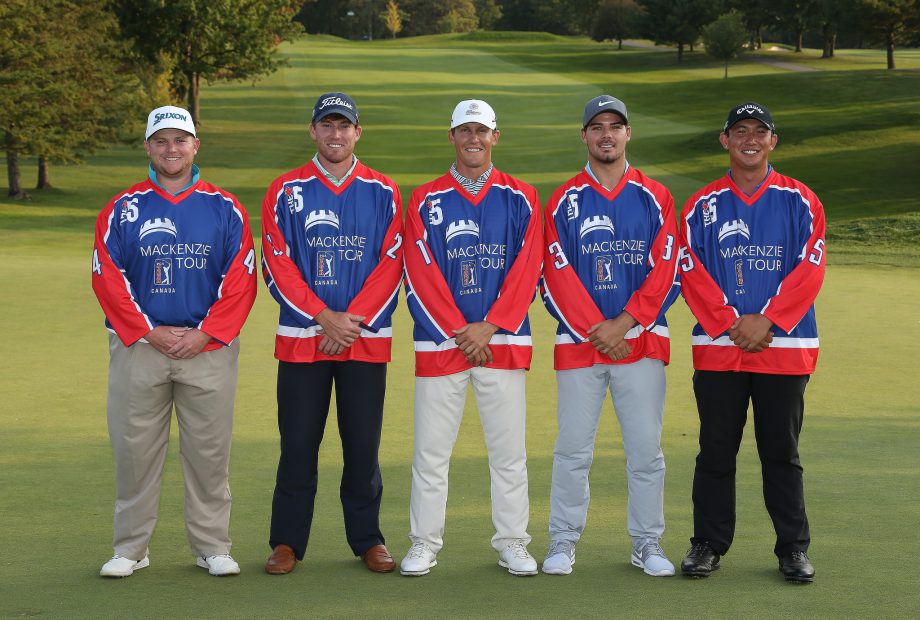 (Claus Andersen/ Mackenzie Tour)
Mackenzie Tour – PGA TOUR Canada
Kramer Hickok of Dallas, Texas wrapped up Mackenzie Tour – PGA TOUR Canada Player of the Year honours on Sunday, finishing with $122,502 in earnings on the season to top the Order of Merit and lead five players who earned status on the Web.com Tour for 2018.
Hickok, 25, produced a remarkable season that included two wins and three runner-up finishes and led five players who made the next step on the path to the PGA TOUR, finishing $32,209 ahead of No. 2 Robby Shelton of Wilmer, Alabama. Joining Hickok and Shelton in The Five were No. 3 Johnny Ruiz of Camarillo, California, No. 4 Patrick Newcomb of Benton, Kentucky and No. 5 Rico Hoey of Rancho Cucamonga, California, who won the season-ending Freedom 55 Financial Championship to move into the final spot in The Five.
The Five will graduate to the Web.com Tour in 2018 and look to follow in the footsteps of 19 players who have gone on from the Mackenzie Tour on the PGA TOUR during the PGA TOUR era (2013-present), including PGA TOUR winners Mackenzie Hughes, Nick Taylor and Tony Finau.
“This was an amazing year, and I’m so thrilled to have earned fully exempt status on the Web.com Tour next year,” said Hickok. “To compete against these incredible players all season on the Mackenzie Tour and be able to finish at No. 1 is a humbling honor, and to see all the hard work I’ve put in finally pay off is an incredible feeling.”
Hickok, a former NCAA All-American at the University of Texas, won twice at the Players Cup and the Ontario Championship hosted by National Pines Golf Club and added three-runner up finishes. His total of $122,502 in earnings represents the second highest single season earnings total on the Mackenzie Tour during the PGA TOUR era.
“We are so pleased with the success of the 2017 Mackenzie Tour – PGA Tour Canada and congratulate all of the golfers on their incredible season,” said Barry McInerney, President and Chief Executive Officer of Mackenzie Investments. “At Mackenzie Investments, we believe in striving to bring our best to everything we do and the winners of the Mackenzie Tour exemplify that same confidence and tenacious attitude. Now that we have completed our third season as the umbrella sponsor, we continue to be impressed by the partnership, players and most importantly, the charitable aspect which helps so many communities across Canada.”
Players 6-10 earn spots into Final Stage
In addition to The Five earning status on the Web.com Tour, players finishing 6-10 on the Order of Merit earned an exemption into the final stage of Web.com Tour Q-School, led by No. 6 Lee McCoy of Tampa, Florida, No. 7 Max Rottluff of Dusseldorf, Germany, No. 8 Chase Wright of Muncie, Indiana, No. 9 Jordan Niebrugge of Mequon, Wisconsin and No. 10 T.J. Vogel of Hollywood, Florida.
Players finishing 11-20 earned an exemption into the second stage of Web.com Tour Q-School
Partner message