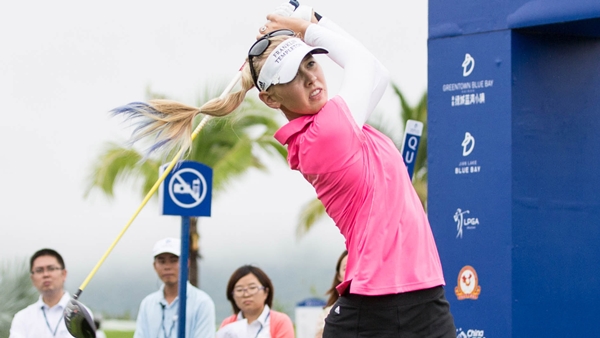 HAINAN ISLAND, China – American Jessica Korda rebounded from an opening double bogey for a share of the second-round lead Saturday in the Blue Bay LPGA.

“I got a little frazzled there as I was walking to the first tee box and then obviously didn’t hit a good shot,” Korda said. “I just I tried to forget about it, tried to bring back.”

Pace had seven birdies and a bogey in a 66.

After rain washed out play Friday and forced tour officials to cut the event from 72 to 54 holes, the start of play Saturday was delayed three hours.

“The golf course is draining incredibly well for how much rain we got,” Korda said. “The bunkers are obviously a little wet, but other than that, it’s amazing how well it’s responded to how much dumping it’s gotten.”

Korda, the first-round leader Thursday after a 66, won the season-opening event in the Bahamas in January and took the Mobile Bay LPGA Classic in May in Alabama.

“I would say the putt on 18 that I made to save par was definitely good to bring the momentum that I had on the last 17 holes. To bring it in for tomorrow,” Korda said. “So, hopefully, I can just feed off of that.”

Pace, winless on the LPGA Tour, is coming off a playoff victory last week in the Ladies European Tour’s South African Women’s Open.

“I played pretty decent,” Pace said. “I made quite a few putts already by that stage and then the putter just started rolling nicely toward the end.”

“Maybe I just like the type of grass. I can read the greens fairly easy,” Pace said. “I think what you see is what you get.”

South Korea’s Chella Choi was 10 under after a 66.

Americans Michelle Wie and Brittany Lang closed with birdies to join China’s Shanshan Feng at 9 under. They shot 68.

Wie is making her second start since withdrawing from the Evian Championship in September after reinjuring a stress reaction in her right hand. She marveled at the course conditions after the heavy rain Friday and Saturday morning.

“It’s pretty amazing how great the golf course drained,” Wie said. “We were like sitting on the ground today while we were waiting and it was absolutely dry. It was so dry. It’s crazy. It’s pretty phenomenal what they did with the bunkers and how they got the course ready in that short of time. I think any other course if we got that much rain we’d be done for the week. So it’s pretty phenomenal.”

Feng won the LPGA Malaysia two weeks ago for her fourth LPGA Tour title and is seeking her second victory in China after winning the Reignwood LPGA last year in Beijing.

The tournament is the fourth stop on the six-tournament Asian Swing. The LPGA Taiwan Championship is next week, followed by the Mizuno Classic in Japan.