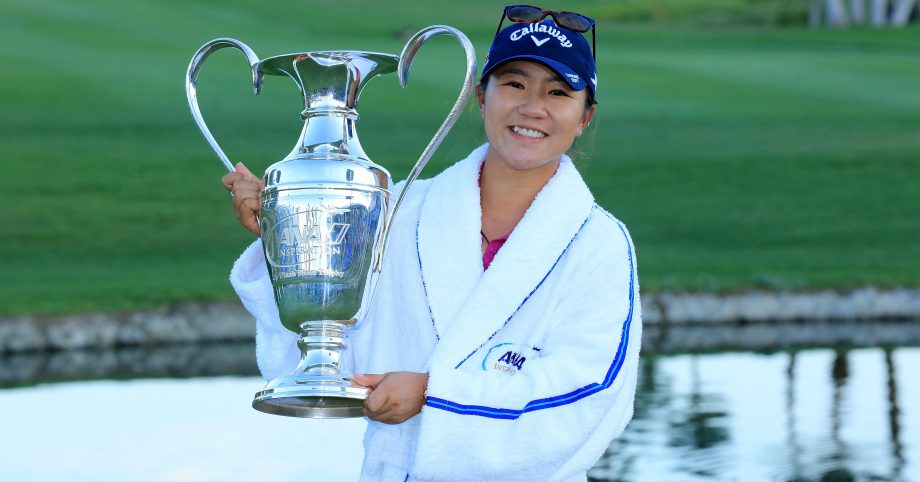 The top-ranked Ko hit an 88-yard wedge shot to a foot on the par-5 18th to set up her winning birdie – and an unlikely victory leap into Poppie’s Pond. She closed with a 3-under 69 to finish at 12 under.

“This is an unbelievable moment,” Ko said before jumping into the pond.

Jutanugarn had a two-stroke lead at 13 under with three holes to play. The 20-year-old Thai player bogeyed all three holes, three-putting the par-4 16th, failing to get up-and-down from a bunker on the par-3 17th and hooking her drive into the water on 18.

“I really get nervous, especially being my first time leading,” Jutanugarn said. “Next time, it’s going to be so much fun to be there.”

Charley Hull and In Gee Chun finished a stroke behind Ko, and Jutanugarn ended up fourth at 10 under.

Ko won the final major last season, the Evian Championship in September in France, and took the LPGA Tour event last week in Carlsbad. The 18-year-old New Zealander has 12 LPGA Tour victories, five last year when she was the tour’s player of the year.

“It has always been my dream to play on the LPGA Tour,” Ko said. “For these amazing things to be happening it is unbelievable, but it also motivates me to work harder.”

“Obviously, making those putts on 11 and 13 was crucial, too, but just not knowing anything, I wanted to focus on my game and just what I could control,” Ko said. “But on 17, I knew what I needed to do. Something like a miracle needed to happen, so I think 17 was probably the most crucial putt.”

Until Sunday, best known for blowing a two-stroke lead with a closing triple bogey at age 17 in the 2013 LPGA Thailand, Jutanugarn made four birdies in a five-hole stretch in the middle of the round to move into position for a breakthrough victory that slipped away. She finished with a 71.

“I got a lot of experience from this week,” Jutanugarn said.

Hull birdied the 18th for a 69 and her best finish in a major.

“I know I can play well under pressure now when I have to get it going,” the 20-year-old English player said. “I’m happy I holed that putt on the last, and I’m proud of myself. It feels great. Lydia hit a great shot into the last, and she should be proud of herself.”

Chun also closed with a birdie in a 70. The U.S. Women’s Open champion was making her first start after sitting out a month because of a back injury. She was hurt when she was struck by a hard-case suitcase that rival South Korean player Ha Na Jang’s father dropped down an escalator at the Singapore airport.

Lexi Thompson, the third-round leader, eagled the last hole for a 73 to finish fifth at 9 under. The 2014 winner had three front-nine bogeys and failed to make a birdie.

“Just overall tough day,” Thompson said. “I struggled today, ball-striking, and the bad ball-striking didn’t give me many birdie chances, so I struggled a bit with the putter as well.”

Brooke Henderson shot a 67 for the best round of the day. The 18-year-old Canadian tied for 10th at 7 under and to run her LPGA top-10 streak to six events.