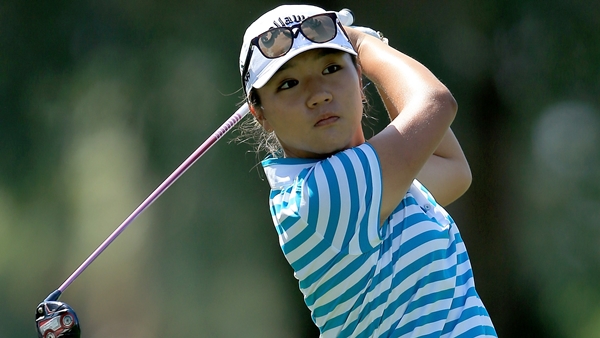 Lexi Thompson figured young friend Lydia Ko was dead in the woods to the left of the seventh fairway.

Trying to tie Annika Sorenstam’s LPGA Tour record for consecutive rounds under par, the 17-year-old Ko was even par with three holes left Thursday in the first round of the ANA Inspiration. And she was stuck behind five large trees.

“It was a pretty nasty place to be,” Ko said.

To escape, she needed to a hit a sweeping, low hook.

She did, with the ball scampering onto the green and stopping pin-high 25 feet to the right.

“I said, `I’m going to try to hit the biggest hook,'” Ko said. “It would have probably looked really bad, that swing on camera, but it ended up being OK. … I had to hit it low enough and had to hit a slinging hook, so I didn’t end up in the bunker.”

The New Zealander two-putted for par, then hit a 6-iron to 18 inches on the 158-yard eighth to set up the birdie she needed to get under par. She closed with a par on the par-5 ninth for a 1-under 71 to match Sorenstam’s record of 29 straight rounds under par.

Ko was tied for 10th, four strokes behind first-round leader Morgan Pressel in the first major championship of the season. Pressel won the 2007 tournament to become the youngest major champion at 18 years, 10 months, 9 days.

“I kept the ball in play,” Pressel said. “I was never really in terrible position.”

“I actually have been hitting the ball fairly well the last couple of weeks and I’ve been out with a bulky putter,” Inkster said. “Today, I made a few putts and I made great par on 16.”

The top six played in the afternoon, long after strong wind tested the morning starters on their opening nines at tree-lined Mission Hills.

Thompson, the defending champion, had a 72 playing alongside Ko in the morning.

“I knew she would salvage the round,” Thompson said. “She might have been a little bit off today, but she has an amazing short game and hit some incredible shots.”

The top-ranked Ko started the streak in the first round of her victory last year in the season-ending event. Her worldwide streak is 32, counting her three rounds in her victory in the Ladies European Tour’s New Zealand Women’s Open.

After Thompson hit into the front water on the 133-yard 14th with the wind gusting to 25-30 mph, Ko hit pin-high to the right and made the 15-footer.

Ko bogeyed three of the next four holes to make the turn at 1 over.

Playing into a right-to-left crosswind on the par-4 15th, she drove into the front of the left fairway bunker. A half-foot from the lip, she chipped 30 yards to the fairway and hit her 6-iron third to 35 feet.

On the par-4 16th, she drove left into rough on the front edge of a bunker. Her fairway wood with the ball below her feet was short of the green in the left rough and she hit her third to 20 feet.

She was fortunate to drop only one shot on the par-5 18th. After going from the right to left rough and sending her third through the green, Ko hit a flop shot that ticked a palm tree and stopped in the fringe. Her downhill putt raced 15 feet past, but she holed the comebacker.

“I would have never thought I would hit the tree that was like 3 yards away right on my target,” Ko said. “But holed a good putt, so maybe that was the turning point.”

Ko got back to even par on the par-5 second, chipping to a foot. She also chipped to a foot on the par-3 fifth after missing to the left.

She was too busy scrambling to worry about the record.

“A record was the last thing I was thinking about,” Ko said.

Ko won in Australia in February – the week before her New Zealand victory – for her sixth LPGA Tour victory. She has 10 worldwide titles in professional events.

Canada’s Alena Sharp opened with a 76 and was tied for 85th after the opening-round.