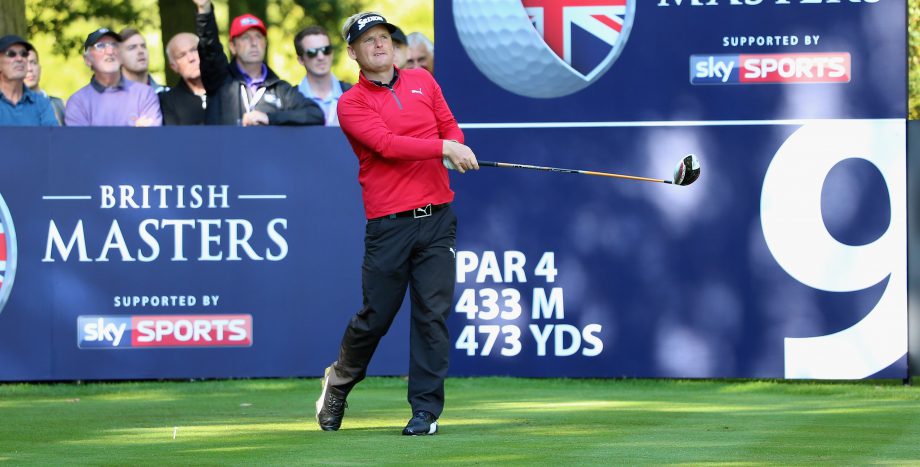 WOBURN, England – Denmark’s Soren Kjeldsen joined England’s Matthew Fitzpatrick at the top of the British Masters leaderboard on Friday after both reached a 9-under total of 133 at the halfway stage.

Kjeldsen, who won the Irish Open earlier this year, made a 3-under 68 in his second round, while Fitzpatrick, the sole leader on day one, shot a 2-under 69.

Kjeldsen holed out from a greenside bunker 40 yards from the flag on the third hole, a par-4, which was his highlight of the round.

“It was not stress-free today,” Kjeldsen said. “I got off to a slow start and didn’t make the putts, then I hit a bad second shot on three and found the bunker but holed it.

“I focus on the sound when the club hits the sand. Straight away I felt I had a lovely sound to the shot and I managed to get up on the hill and watch it disappear.”

The 21-year-old Fitzpatrick again birdied 17 and 18 to maintain his first-place position on the leaderboard.

“It was pretty tough out there today for me, I didn’t feel like I hit it my best,” Fitzpatrick said. “I scored well coming in to shoot 69 and stay at the top.”

Fitzpatrick is chasing his first professional victory on the European Tour but is primarily focused on improving his world ranking of 111.

“I wouldn’t say it is something I am concentrating on (a first win), it is more one hole and one round at a time,” Fitzpatrick said. “If the one doesn’t come this week, but I keep moving up the world rankings, that is good enough for me.”

England’s Richard Bland, who needed treatment on the course for a back injury, is a shot behind, alongside Thailand’s Kiradech Aphibarnrat.

Bridgestone Invitational winner Shane Lowry, of Ireland, is also in contention going into the weekend. He is two shots off the lead with 135.

“I’m pretty happy, I could have been a few shots better but I am in a good position going into the weekend,” Lowry said. “The two par-fives on the back nine were my front nine today and I didn’t make birdie, which is a little bit annoying.”

Tournament host Ian Poulter is five shots behind on a 4-under total of 138.