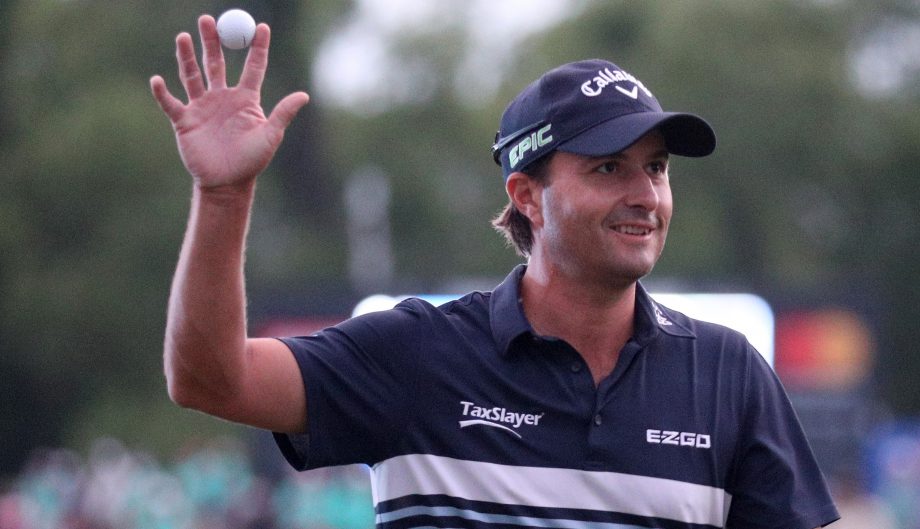 AVONDALE, La. – Kevin Kisner chipped in for eagle on the 18th hole as darkness fell Sunday night at the Zurich Classic, lifting himself and teammate Scott Brown into a Monday playoff with Jonas Blixt and Cameron Smith.

Kisner’s chip-in – which skipped on a wet green, hit the pin and dropped in from nearly 95 feet – forced the 23-year-old Smith to make a 1 1/2-foot birdie putt to remain in contention for his first PGA Tour victory.

They were at 27 under through four rounds at the TPC Louisiana in the PGA Tour’s first team event in 36 years.

Blixt, a Swede, and Smith, an Australian, haven’t bogeyed a hole yet, and appeared to have the victory wrapped up before Kisner’s chip-in, which whipped the die-hard crowd around the final green into a frenzy while Kisner waved both arms in celebration.

The round finished in barely playable darkness because of a more than six-hour delay cause by thunderstorms.

Each player on the winning team will take home $1.02 million and earn 400 FedExCup points.

The Canadian duo of Graham DeLaet and David Hearn shot a 9-under 63 on the final day to finish 16 under.

Blixt and Smith led after the second and third rounds, but had to overcome a remarkable surge by Brown and Kisner, who stormed into the lead with birdies on the first eight holes and 10 of their first 11.

Blixt made a 5-foot birdie putt on the 16th, and Smith did the same on 17th to put themselves back in the lead.

Smith then dropped a 57-yard approach on 18 within 2 feet, seemingly dooming Kisner and Brown to second place. Instead, both teams will be back at it at 8 a.m. on the 18th hole to start the playoff.

Kisner and Brown each have one PGA Tour victory. The 33-year-old Blixt has won twice, but not since 2013.

Jordan Spieth and Ryan Palmer combined to birdie seven of nine holes in the middle of their round to pull as close as three strokes back with three holes to play, but couldn’t quite overcome a deficit that had been as large as six strokes.

Speith’s 16-foot birdie attempt rolled around the lip of the cup and out on 16. That, combined with Spieth’s narrow miss from 3 feet on the 18th green Saturday, and Palmer’s two misses from within 3 feet in the third round, were shots that one of the favoured pairs would have to regret in an otherwise strong, fourth-place performance.

Brown and Kisner led by two strokes after their birdie on the eighth hole and maintained that gap until Smith’s 34-foot putt on the undulating 12th green made it a one-stroke affair with six holes to play.

Kelly Kraft and Kevin Tway finished third at 23 under after Kraft followed up a 266-yard approach on 18 with a 22-foot eagle putt.

The tournament is the first team event on the PGA Tour since the Walt Disney World National Team Championship in 1981. The Zurich began with 80 two-player teams, with players choosing their teammates. Many said they chose friends on the Tour rather than research whose game best complemented their own, and it made for relaxed environment and demonstrations of camaraderie that players said showed more of the fun side of golf.

The players on each team alternated shots in the first and third rounds. In the second and final rounds, each player played their own balls and each team took the best score per hole. The playoff will be in the same format as the final round.