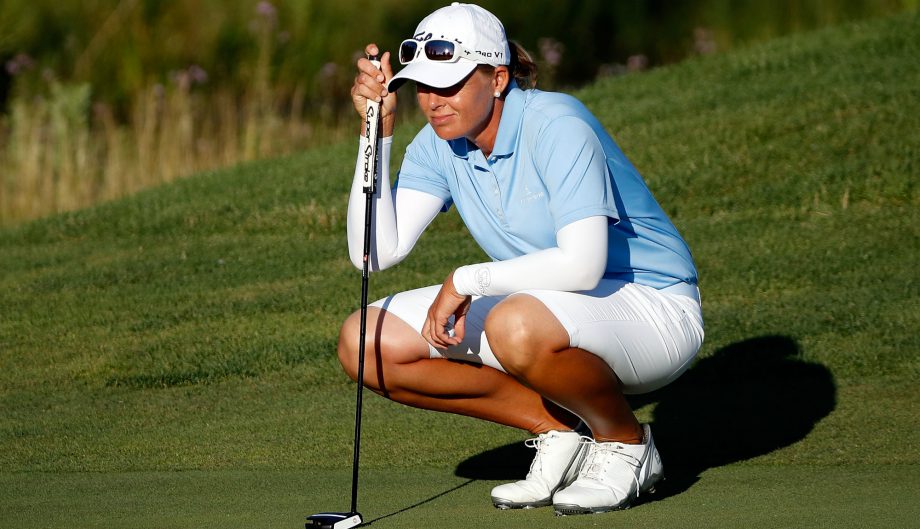 Katherine Kirk shot a 7-under 65 on Saturday to open a four-stroke lead in the Thornberry Creek LPGA Classic, and move into position to challenge the tour’s 72-hole record.

Coming off a career-best 63 on Friday, the 35-year-old Australian reached 20-under 196 in the first year event at Thornberry Creek _ the Oneida Nation-owned resort near Green Bay.

“I’ve been playing pretty well lately, trending at least in the right direction,” Kirk said. “I like this golf course. It suits my eye, and I think it’s going to take another low one tomorrow. You saw some really good scores out there today. It’s not over until it’s over, right?”

The LPGA Tour record for 72 holes is 27 under, set by Annika Sorenstam in the 2001 Standard Register Ping in Phoenix and matched by Sei Young Kim last year in the Founders Cup, also in Phoenix. Sorenstam shot a record 59 in the second round.

Kirk played the first five holes in 1 over with a birdie on No. 1 and bogeys on Nos. 3 and 5. She rebounded with a birdie on No. 6, ran off four straight on Nos. 8-11 and added birdies on 13, 15 and 17. On the par-4 18th, she saved par with a 15-footer after finding the right fairway bunker and hitting her approach well left.

“I know I can putt well, but I think I’m like pushing the limits right now,” Kirk said. “It’s fun…. It’s unexpected, but you certainly take them when you can.”

South Africa’s Ashleigh Buhai was second after a 65. She’s winless on the LPGA Tour.

“Obviously, Katherine is playing really well,” Buhai said. “I saw I got within one at one stage, and then I looked again, and she was back to three ahead. She obviously made a lot of birdies and I felt I made as many as I could. Tomorrow, will be fun between the two of us.”

Buhai had seven birdies in a nine-hole stretch in the middle of the round.

“I hit the ball really solid,” Buhai said. “I made a bogey on my first hole and after that I hit 17 greens in a row. I just kind of favoured to the side of the pin that you had to, and I rolled in a few 15-footers. I was cautious at some times, and then I knew when I could be aggressive. Overall, good ball-striking, and you have to roll in the putts.”

“I’m obviously going to tee off a little bit earlier than the leaders, obviously try and post a number,” Pettersen said. “That’s all I can do at this point. … I love the way they set it up. They invite us to make eagles, go for greens. Hopefully, they’ll do that tomorrow, as well, and everyone will keep seeing low numbers.”

Top-ranked So Yeon Ryu, No. 3 Lexi Thompson and No. 4 Lydia Ko are among those taking the week off before the U.S. Women’s Open next week at Trump International in New Jersey.