Kirk moves into the lead at Sony Open 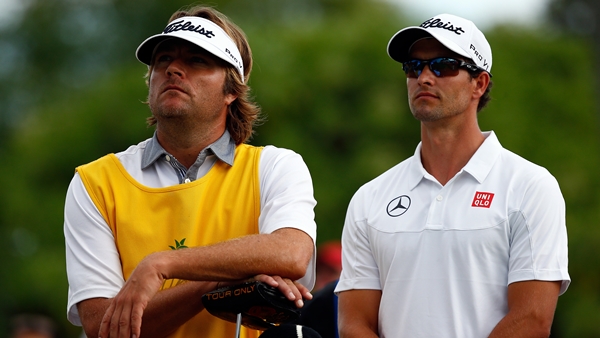 HONOLULU –  Will Wilcox finally got around to making his debut as a PGA Tour rookie and was surprised as anyone to be in the final group at the Sony Open.

As for Chris Kirk and Harris English, it’s no surprise at all.

Kirk got up-and-down from a bunker on the par-5 18th by making a 10-foot birdie putt for a 5-under 65, giving him a one-shot lead going into the final round of a Sony Open that remains up for grabs among at least a dozen players.

Cloudy conditions and only a gentle, Pacific breeze kept everyone in the mix Saturday at Waialae, even John Daly.

The 27-year-old from Alabama made birdie on his last two holes for a 64 and was one shot behind. Wilcox once qualified for the RBC Canadian Open in 2010, and for the U.S. Open in 2011 at Congressional. He finally made it to the big leagues by finishing 10th on the Web.com Tour money list, although he didn’t play in the Web.com Tour Finals or in the fall for what he only said were “unfortunate, personal things.”

And here he is.

Kirk, who was at 12-under 198, won the McGladrey Classic in November, his final tournament of 2013 before taking time off for the birth of his second child. He returned at Kapalua and shook off some rust. And while he closed with a 73 at Kapalua, it was a good day of scrambling and gave him a small measure of momentum on Oahu.

English, who had a 67, won the final event of 2013 in the OHL Classic at Mayakoba. He goes for his third win in his last 16 starts on the PGA Tour.

“It was just kind of ‘Grind it til you find it.’ This course is tough,” English said. “It’s hard to hit the fairways, and you’ve just got to be a wizard around the greens, and that’s kind of how I approached today. I didn’t have my best golf, but I scraped it around at 3-under par and I’m still in this golf tournament.”

So is everyone else it would seem.

At one point there was a six-way tie for the lead. An hour later, 14 players were separated by a single shot.

Daly matched the low score of the third round with a 64 and was five shots behind. Masters champion Adam Scott wasn’t making up any ground, dropped two shots late in his round and finished with a two-putt birdie for a 71 and was two shots behind.

A dozen players were separated by three shots going into Sunday, a group that includes Kapalua winner Zach Johnson as he tries to become the first player since Ernie Els in 2003 to sweep the Hawaii swing.

The plan for all the contenders is to not worry about anyone else because there would be too many players to worry about.

“When it’s so close like that, everybody is going to be making some birdies here and there,” Kirk said. “So I probably won’t look at leaderboards as much as I normally would. A lot of courses I think lend themselves to you need to know what your position is going into any given hole, but out here, I don’t think that’s really the case. They’re just so volatile with guys making birdies and bogeys.

“I’ll just probably try to keep my head down and make as many birdies as I can.”

Perez was among those tied for the lead until he four-putted the 14th, the final three putts from 3 feet. PGA champion Jason Dufner three-putted from 3 feet on the 18th hole for a bogey and was four shots behind.

The long shot would have to be Wilcox, who learned to play from his mother, a golf pro at Pine Harbor in Alabama. Small for his age, he played at least 36 holes a day as a kid, a habit that only changed after he was old enough to drive.

On his bucket list is to play on the PGA Tour. He checked that off. His dream foursome includes Tiger Woods, Jack Nicklaus and Boo Weekley, and he already has played with Weekley. The idea of winning is too far away, even though only 18 holes remain.

“I saw I was beating James Hahn by two or three. He was like 51st and I was in 13th or something,” Wilcox said. “You’ve just got to play tight and make a couple of clutch putts, which I did today. I don’t know. We’ll see.”

Having a decent shot might seem like a dream for Allenby considering where his game has been.

He made only five cuts in 24 tournaments last year and had to use an exemption from career money (top 25) to get his card. Allenby has been making enough putts to at least give himself a chance, and for that, he credits the games he plays at home in Florida. What should have been taken as an insult as turned into a benefit.

“I’ve been playing the guys at Admiral’s Cove, all the 60-year-olds, and they make me putt out because they’re like waiting for me to miss,” he said. “I keep shooting 7-, 8-, 9-unders and stuff with them. They’ve put me in a good mental state for out here on tour.”

Brantford, Ont. native David Hearn is 7-shots back of the lead and tied for 40th at 5-under. Hearn recorded his best round of the event Saturday, firing a 67.