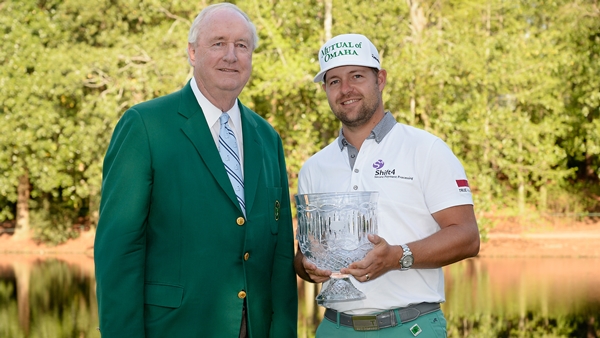 AUGUSTA, Ga. -Tennis star Caroline Wozniacki stood out at the Masters on Wednesday – and not because of her erratic golf game this time.

Wozniacki showed up at Augusta National with her blonde hair dyed bright pink. And she wore matching shoes!

A former top-ranked player on the WTA Tour, Wozniacki caddied for fiancé Rory McIlroy in the Par 3 contest. While other golfers’ kids were the main attraction during the fun event, Wozniacki’s flashy locks got all the attention.

Wozniacki also caddied for McIlroy last year, and drew laughs when she a swing at a ball and sent it dribbling into a pond. She didn’t any hacks this time, just making a putt on the ninth green.

The two sports celebrities were engaged over the holidays. They have set a wedding date but are keeping the details private for now.

The Par 3 contest might as well have been a cutest kid competition.

The annual event at the Masters delivered some of the most adorable moments of the week Wednesday.

Ryan Moore’s 18-month-old son, Tucker, pounded a plastic driver into the ground as he ran across the practice green. Scott Stallings’ 14-month-old son, Finn, putted balls with a small driver and was a star on several holes, stumbling around as he balanced the whole walking and swinging thing. Kevin Streelman carried his 4-month-old daughter, Sophia, to the first tee before handing her off.

All the kids were decked out in white coveralls, the traditional attire for caddies at Augusta National.

Jason Day’s 21-month-old son, Dash, watched his father on the practice range. At the end of the session, Day wrapped the boy’s hands around a cut-down driver and teed one up for him. He made solid contact every time, something only swing with one hand on the club. Day couldn’t keep the balls on the tee fast enough.

Before long, the boy took his father’s hand and walked with him over to first hole.

The children were as much part of the Par 3 tournament as their dads, with the older ones carrying bags and even getting a chance to putt in front of hundreds of spectators.

Added 2008 Masters champ Trevor Immelman, who had his son and daughter in tow: “It’s great. My little guy’s been doing this since he was 1 or 2. They look forward to it all the time.”