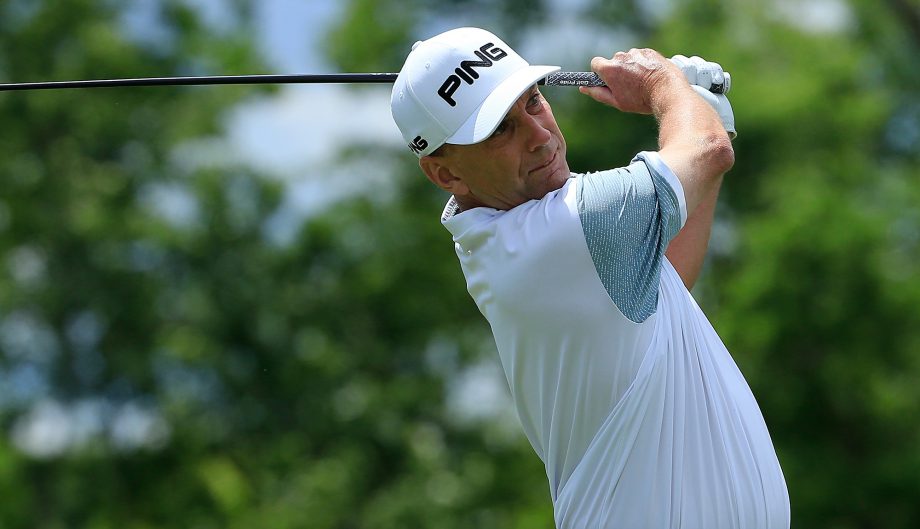 CALGARY – Kevin Sutherland made the most of an early start at the Canyon Meadows Golf and Country Club on Friday.

Sutherland was in the second group out on the back nine of the par-70, 7,086-yard course and had birdies on his second and fifth holes before adding six more on the front nine for an 8-under 62.

His round held up as the best of the day, leaving him atop the leaderboard after the opening round of the Shaw Charity Classic.

“It was nice to get out early in the day,” said Sutherland, who birdied five of his final seven holes. “The weather was nice and cool, which was something that we haven’t had a lot lately, so it was nice to get a nice cool day out here.”

On his final hole, Sutherland had a chance to make another birdie to tie the course record of 61, but he just missed the putt to the low side of the hole.

“I had no idea,” said Sutherland. “If I would have known, I might have tried to hit it a little higher.”

Sutherland has finished second three times this season on the PGA Tour Champions circuit and also has 12 top-10 showings in 16 starts.

“I’ve been playing well all year,” he said. “I feel like my game’s in a really good place right now. I’m hitting a lot of really good, quality iron shots, which is giving me a lot of good opportunities.”

“I’ve played a bunch with Kevin the last month or so,” said Spittle, who finished as the low Canadian after shooting a 3-under 67. “He’s playing really, really well. He’s a terrific player.”

Spittle finished Friday’s round in a tie for 23rd spot with nine other golfers including 2014 Shaw Charity Classic winner Fred Couples.

“The course is in such terrific condition,” Spittle said. “The greens are so smooth. That’s the reason for the low scores.

“It’ll be, I’m sure, a birdie-fest for the fans to watch for the next couple days, without a doubt.”

Scott McCarron received a nice round of applause after he eagled the par-5, 18th hole to shoot 63 and finish alone in second spot after the first of three days of competition.

“You make the eagle and it’s a nice reaction – almost feels like you’re winning a tournament or something like that and it’s only Friday,” McCarron said. “The 18th is just fantastic – great theatre.”

Miguel Angel Jimenez also eagled the 18th hole to finish in a four-way tie for third spot with Todd Hamilton, Billy Andrade and Scott Dunlop at 6-under 64.

Vancouver’s Stephen Ames had a 69 to finish in a tie for 45th with nine other golfers, including defending champion Carlos Franco.

Victoria’s Jim Rutledge finished well back of the pack with a 72.

Shaw communications is donating $500 for every birdie made on the 18th hole throughout the tournament to support the shaw charity classic’s 156 youth-based charities across the province. Today, 27 birdies were made on the par-5, 18th hole, bringing shaw’s birdies for charity total to $13,500.