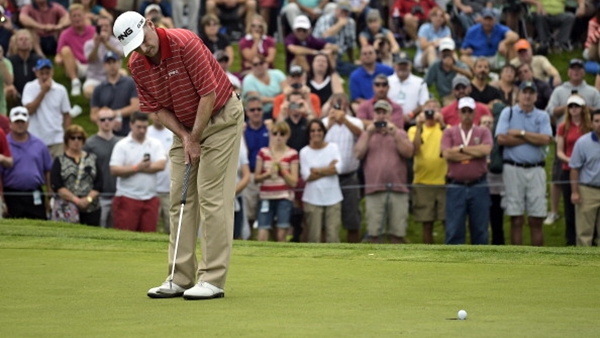 The 50-year-old Sutherland had a chance to become the first player to card a 58 in a PGA Tour-sanctioned event with a par on No. 18, but made his only bogey of the day. His par putt from about 6 feet slid just past the hole.

Sutherland opened with seven birdies and an eagle on the first eight holes. He had 12 birdies overall, including three straight coming into No. 18 to set up the chance for a 58.

He settled for a 13-under 59, after shooting 71 in Friday’s first round in his third Champions Tour event.

Six players have shot a 59 on the PGA Tour.

After an eagle on the fifth hole, Sutherland said he got the feeling “this could be a good day.” A chip-in for birdie from a bunker on the par-3 seventh confirmed it.

“That was my biggest break of the day,” Sutherland said. “I guess you need a margin of luck to shoot a 59.”

Many of the other players who had finished their rounds gathered to watch Sutherland finish.

“I wasn’t expecting that,” Sutherland said. “It blew me away. It’s emotional, really, to see those guys, the support you get out here.”

He added, “Who would have thought you’d bogey the last hole and still feel great?”

Canada’s Rod Spittle shot a 67 Saturday and is tied for 8th at 9-under 135 heading into the final round.