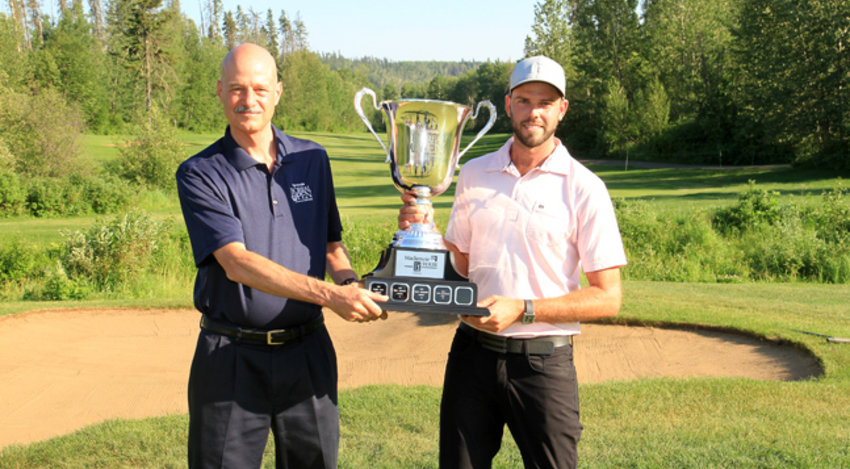 Spooner, who entered the week without status on the Mackenzie Tour and earned a spot in the field thanks to a top-20 finish at the Bayview Place Island Savings Open presented by Times Colonist three weeks ago, immediately earns exempt status and moves to no. 2 on the Order of Merit behind leader Albin Choi.

“It’s been a bit of a whirlwind for me, because I was just trying to get status on this tour. I was fortunate enough to get an exemption into Victoria and turned that into another start for me. I was just trying to rack up those dollars to get status after the re-shuffle, and the win certainly helped; I don’t think I have to worry about that anymore,” said the 26 year-old Spooner.

Spooner began the day nine strokes off Silverman’s 54-hole lead, but came out on fire with four birdies and an eagle in a front-nine 30. After adding three more birdies at the 10th, 12th and 15th holes, Spooner made par at the par-5 18th for a 9-under 63 and a 16-under total. He then had to wait over 1 hour and 45 minutes to see how the final groups would determine his fate.

Gooch, playing in the day’s penultimate group, carded a birdie at 16 and pars and 17 and 18 to join Spooner at 16-under, while Silverman, who held or shared the lead after every round this week, came to 18 with a chance to win outright. After he was unable to convert a 20-footer for the win outright, the trio headed back to 18 for a sudden-victory playoff.

The first two extra holes settled nothing, with Gooch making a pair of miraculous up-and-downs from the back bunker and the hazard short of the green to record pars that Silverman and Spooner each matched.

With each player laying up on the first two extra holes, Gooch took matters into his own hands on the third trip around, blasting a three-wood and hybrid onto the green in two and putting the pressure squarely on Silverman and Spooner. While Silverman was unable to convert a birdie chip to tie, Spooner knocked his approach to 12 feet and calmly rolled in the putt to keep things going.

Another extra hole between the two produced a pair of pars, sending them back for a fifth extra hole, and setting the new record for the longest playoff of the PGA TOUR era on the Mackenzie Tour in the process. While Spooner stayed steady by hitting an iron off the tee, Gooch’s more aggressive strategy with a three-wood was ultimately his undoing, with a wild tee shot leading to a lost ball. Four shots later, Spooner tapped in for an easy par and the victory.

“Teeing up this morning, I thought I had absolutely no chance to get into contention for the win, being nine shots back to start. I got off to a great start, played pretty aggressive and made a lot of putts,” said Spooner. “It was quite the grind, quite the battle to keep going there for five holes.”

With his win, Spooner joins a long line of players from the University of Washington to succeed on the Mackenzie Tour, following in the footsteps of former Huskies Brock Mackenzie, Joel Dahmen and Joe Panzeri, along with Nick Taylor, who won the Sanderson Farms Championship on the PGA TOUR less than 14 months after finishing No. 7 on the Mackenzie Tour Order of Merit.

“I’ve come a long way in my golf. I was really never that good in college, and up-and-down and in and out of the lineup. I really had no aspirations to turn pro. I ended up playing a lot better golf in some amateur events and turned pro a couple of years ago,” said Spooner. “I’ve played a lot of golf with those guys and learned a lot from Joel and Nick and gained a lot of confidence and my game’s come a long way.”

With an original goal of earning status by placing in the top three on the Order of Merit through six events, Spooner’s focus now shifts to the race for The Five and earning status on the Web.com Tour.

“The goal was originally just to get status, but with a win I’d love to get one of those top five spots and join my friends out on the Web.com Tour and hopefully be playing with Nick on the PGA TOUR,” said Spooner.

Gooch, a Mackenzie Tour rookie, and Silverman, a second year member, each notched their best career finishes on Tour.

Toronto, Ontario’s Albin Choi continues to lead the Mackenzie Tour Order of Merit through three events. The top five will earn status on the Web.com Tour for the following season, with the Order of Merit winner earning fully exempt status. Below are the top five (bold denotes Canadian):