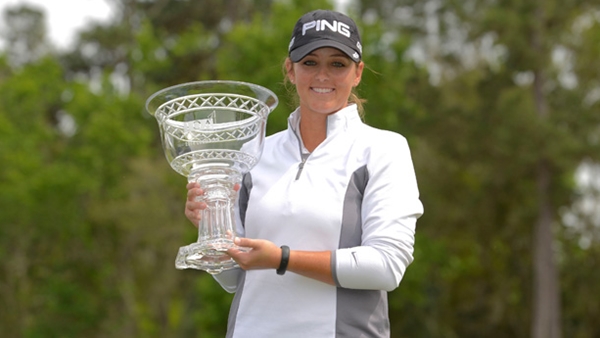 Dye, who was playing in her 56th career Symetra Tour event, got over the hump by virtue of a flawless back nine that including four birdies and a chip-in eagle on the 16th hole.

“It’s pretty surreal, I had good feelings and positive thoughts going into the day, but I was three shots back,” said Dye.  “It was a pretty special day, it was a long day and it was Jesus on the back nine; I had just nine putts.”

Dye entered the day three shots back of Hannah Yun.  She birdied the tenth hole and then made back-to-back birdies on the 12th and 13th.

She seized complete control of her destiny with a birdie on 15 and an eagle on the 16th hole.

“My emotions were calm and it was pretty cool to finish strong and actually put a performance together and win.”

On the 18th hole, with a three stroke cushion, Dye had a short tap in putt to seal the victory.  She made the par putt and then was doused with water from friends and fellow Symetra Tour players Sara Brown, Mallory Blackwelder and Calle Nielson.

“I really wanted to ace the 18th hole because I stuck it close all day and told my caddy that we were going to make a long one,” said Dye.  “I was really glad that they stayed and celebrated with me.”

With the win, Dye skyrockets from 14th to second on the Volvik Race for the Card money list at $19,952 in earnings on the year.

“The win definitely takes the pressure off for the rest of the year.  I still need to compete, I still need to play in hopefully all of the events, but now maybe I have a little leeway where I may not have to play ten weeks in a row.”

The journey has been long and trying for Dye, who has played on the Symetra Tour since 2010.

“My mission every year is to come away with an LPGA Tour card and I’ve been to Q-School too many times so I’m looking at these 19 or 20 events as my Q-School,” said Dye.  “I’ve got 60 rounds to play well and earn some money to get onto the next stage.”

Yun, who led by one stroke after two rounds, shot an even-par 71 and finished in second place at 8-under for the tournament.  She made back-to-back bogeys to open her round and never recovered.

With the second place finish, Yun jumps into the top-10 on the Volvik Race for the Card money list.  She has earned $10,770 after four events this season.

Katelyn Sepmoree, a rookie on the Symetra Tour, finished third at 6-under.  The Tyler, Texas native shot 1-over on the day.

LPGA Tour veteran Reilley Rankin fired a 1-under-par 70 on Monday to finish fourth in her first Symetra Tour event of the year.

Sara-Maude Juneau of Fossambault-sur-le-lac, Que. and Samantha Richdale of Kelowna, B.C. were the leading Canadians in Florida. The pair tied for 22nd at 1-over-par 214.