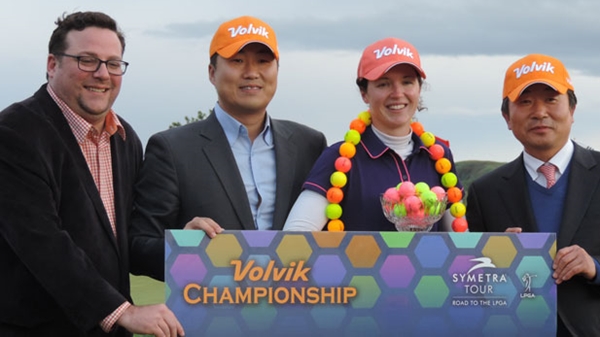 BEAUMONT, Calif. – Katie Kempter won the Volvik Championship at Morongo Golf Club in cold, wet conditions Sunday for her first Symetra Tour title, beating Lee Lopez with a par on the second hole of a playoff.

With the temperature in the low-40s with light rain and wind gusting to 20 mph, Kempter birdied the final three holes of regulation for a 1-under 71 and got in the playoff when Lopez bogeyed the final hole for a 72. They finished at 5-under 211.

“It is a little surreal,” said Kempter, from Albuquerque, New Mexico. “I didn’t know what to think when I realized I won, but this is very special.”

They parred the par-4 18th on the first extra hole, and Kempter won on the hole a few minutes later when Lee lipped out a short par putt.

“You never want to see someone lip out to decide the outcome,” Kempter said. “I was like, `Oh, my gosh, this actually happened.'”

The 27-year-old former University of Denver player was making her 70th tour start. She earned $15,000 to move into second on the money list after two events. The final top 10 will earn 2016 LPGA Tour cards.

“A win is huge, but it doesn’t mean your work is done,” Kempter said. “There is a lot of work to go, it is just the very beginning of the season, but it is a nice way to start the year for sure.”

Kempter qualified for the LPGA Tour in 2010 through Q-school.

Canadian Maude-Aimee LeBlanc held the lead heading into the final round, but carded a final round 80 to slip into a tie for 4th at even par.