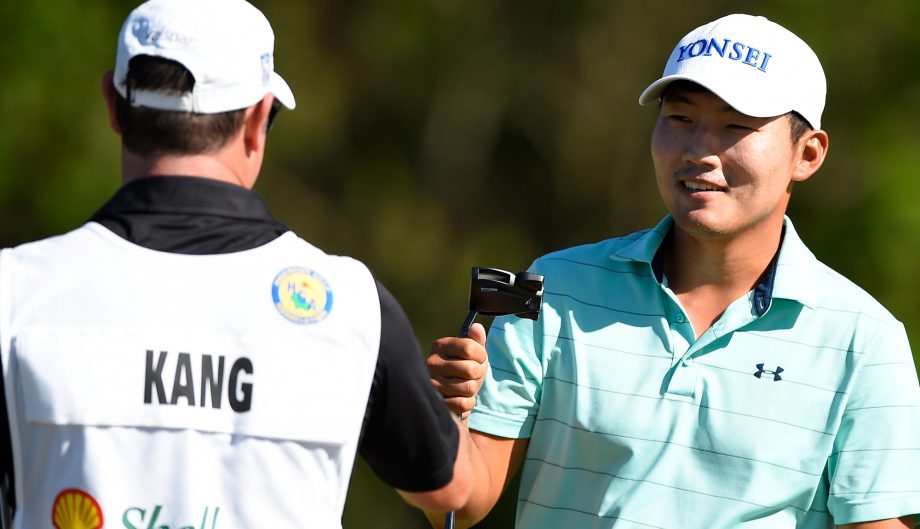 HUMBLE, Texas – Sung Kang shot a 9-under 63 to take a six-shot lead in a record-breaking second round at the Houston Open on Friday.

After shooting a 65 on Thursday, Kang was at 16-under 128 through two rounds, setting the 36-hole tournament record of 129 by a stroke, set previously by Blaine McCallister in 1993 and Curtis Strange in 1980.

The 29-year-old South Korean, who entered the week ranked No. 202 in the world, bested the tournament course record at the Golf Club of Houston by three strokes, topping Johnson Wagner’s 132 in 2008. Strange and Wagner went on to win those respective tournaments, while McCallister settled for a third-place finish.

Kang’s 9-under on Friday matched the 18-hole tournament course record and helped him take the largest 36-hole lead in tournament history, topping the previous record by two strokes.

Hudson Swafford and Russell Henley were at 10-under after both shooting 5-under 67.

Rickie Fowler, the leader after one round, slipped to fourth at 9-under after he followed Thursday’s 8-under 64 with a 71.

Kang found an edge with red-hot putting. He sank six puts of at least 20 feet – a tournament course record since the stat began being recorded in 1983. It was a dramatic turn of events for a golfer who entered the week ranked No. 156 in putting and switched to a new putter earlier this week.

Kang said someone has been urging him to use a certain putter for months, even saying, “If you want to succeed, you use that.” He gave it a spin for the first time on Monday and hasn’t looked back.

Kang used the word “rare” to describe the putting clinic he put on. He said he told his caddie that he wanted to play 10 more holes after he was finished on Friday, not wanting to let his momentum rest. He is among the 115 players who need a victory to qualify for Augusta National, as Jim Herman did by winning in Houston last year. Among the 144 players in the Houston Open field, 29 already have invitations to play.

Kang insisted that playing in the Masters hasn’t crossed his mind.

“It’s not in my head,” Kang said. “Whatever happens, happens.”

Zac Blair and Aaron Baddeley trail Kang by eight strokes at 8-under 136 through two rounds.

The field boasted five of the world’s top 12-ranked golfers, but only one of them – Fowler – made the cut to continue playing on Saturday. No. 5 Henrik Stenson shot a 5-over, No. 6 Jordan Spieth finished 2-over, No. 7 Adam Scott had a 1-over and Patrick Reed shot a 2-over to add two extra days to their Masters preparations.

Nick Taylor of Abbotsford, B.C. and Mackenzie Hughes, from Dundas, Ont., both made the cut. Taylor shot a 71 and is 4 under while Hughes shot a 70 and is 2 under.

Phil Mickelson rallied late to shoot par for a second straight day to make the cut, something he said was important to him ahead of Augusta.

“I fought hard in the end to get to the weekend because I felt, to get sharp for next week, I need to play a better round,” Mickelson said. “I didn’t want to have five days without competitive rounds before we tee off. I also think the course provides a great opportunity to get ready for next week.”

After mid-week rains dampened the course Thursday, warm, sunny weather and a light breeze caused little problems on the fairways on Friday.