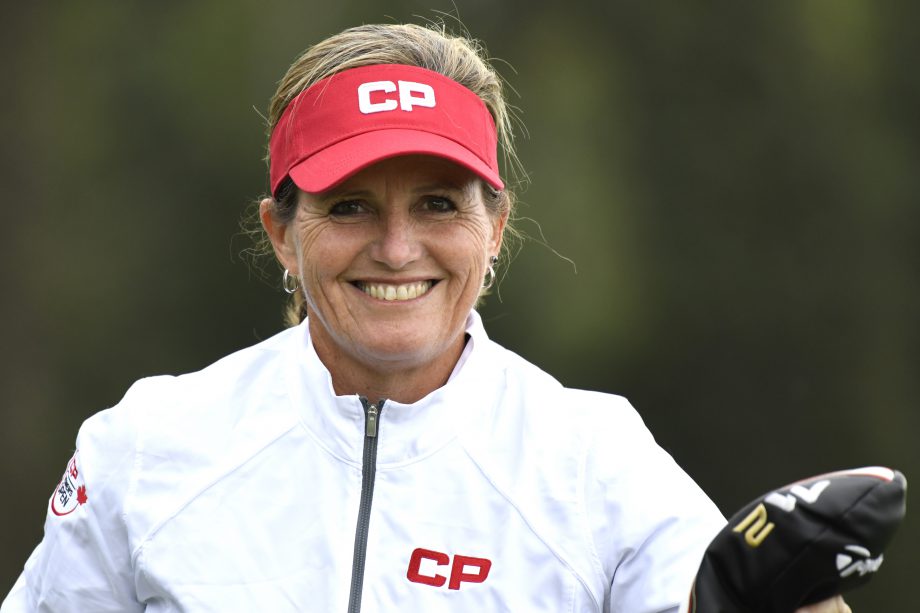 In Lorie Kane’s opinion, anyway, this is one head-to-head match-play duel she can never, ever win.

“I owe golf,’’ she is saying, with utter certainty, “a whole lot more than it owes me. Someone once asked me: ‘What do you love about golf?’ I answered: ‘What it’s afforded me to do.’

Golf helped shape the person I am. I don’t think I’m this Lorie Kane without the game.”

The flip-side argument being that golf in this country wouldn’t be what it is without Lorie Kane, either.

During the CP Women’s Open this week at Priddis Greens, a solid five-iron outside of Calgary, the Charlottetown native will be inducted into the Canadian Golf Hall of Fame, joining fellow 2016 inductees writer/commentator Bob Weeks and two-time men’s national amateur champion Warren Sye.

So let her protest; to her heart’s content, in fact. Quibble away. This particular tribute has for a while now shaped up as a slam-dunk.

Because it’s not a stretch to argue that for an entire generation of aspiring female golfers aiming of the stars, Lorie Kane has come not only to represent, but to symbolize their game in this country, stem to stern, tip to tip. The way Jocelyne Bourassa or Sandra Post did for preceding eras.

“I feel she’s the continuation of torch passing,’’ says Post, chair of the Hall’s selection committee. “We have a wonderful history of women’s golf in this country. I first think of Ada (Mackenzie), Marlene Streit, then in the late ‘60s we move from amateurs to professional. There was Jocelyn Bourassa, myself, Coe Jones and Lisa Walters. We passed it along nicely. Then we passed it nicely to Lorie.”

“Golf Canada does such a great job of giving amateurs, giving young people, the chance to get better, added Post. “Whether that’s through coaching or advice or travel. They’re really extremely generous. But there are still a lot of rungs you have to climb to get to the top rung.

“Now we have there’s Brooke (Henderson), of course, to continue the tradition.”

“Considering Lorie started so late, the length of time she played on Tour is amazing. I don’t see that happening much anymore, that late bloomer. She’s different in that way. Didn’t have much of an amateur career. It didn’t come easy. She really had to battle. And now she’s heading out on the senior tour. She’s hung in there. It’s not easy to play a long time on the LPGA Tour; it’s not easy to win on the LPGA Tour. And she’s done it all with a smile. So I’d say it’s been a very good, very successful, very kind legacy.”

The credentials are by now familiar, and impeccable: Those 10 professional wins, four arriving on the LPGA Tour, the Bobbie Rosenfeld Award as this country’s top female athlete in 2000, the Order of Canada honour six years later.

It’s been quite the journey – from Charlottetown to the grand theatres of the game.

“I’m generally not somebody who spends much time reflecting on where she’s been,’’ reasons Kane. “I try very hard to stay where I am and to think about where I’m going. But when Sandra contacted me to tell me I’d been given the honour of being inducted, and inducted into this year’s group – Bob Weeks is a very good friend, who’s done a lot for golf, and then Warren – I’d be foolish to tell you I didn’t start reflecting on the past and where I’d come from. It’s pretty cool.”

“I sometimes think Hall of Fame as being something at the end. I’m far from the end but things are changing. My relationship with CP has allowed me to do a whole lot more than I ever would’ve done if I’d never met (longtime Canadian Pacific Railway executive) Hunter Harrison. He not only changed my life but women’s golf. Let’s face it, Chairman Brown at DuMaurier, when they pulled in the rules that we couldn’t sponsor anymore, golf was in the tank.”

Kane is spot on in thinking of herself as quintessential Canadian, having learned the game here, developed her skills here, before moving out onto its grandest stage and leaving an imprint.

“I didn’t play college golf. I’m probably one of the most non-traditional athletes imaginable in how I got to where I am. I’ve represented our country on several occasions. I met my coach, Jack McLaughlin, in 1988, when I wasn’t sure what I would be doing. I knew I wanted to play professional sport. I didn’t know it was going to be golf. I’ve had so many wonderful people help me along the way; that believed in me.”

“So now, to be in the Hall, with the great athletes we have on the golf side, is really neat.”

Her 11-under-par, three-stroke victory over American Kristi Albers at the 2000 Michelob Light Classic at the Fox Run Golf Club in Eureka, Missouri, proved to be Lorie Kane’s breakthrough moment.

From there, she’d top the leaderboard at the New Albany Classic, again in 2000 (a season she won nearly $2 million and had nine seconds and 34 Top 10 finishes), then the Mizuno Classic and Takefuji Classic a year later.

No one could’ve possibly foreseen it at the time, naturally, but that fourth and final LPGA triumph – she’d come agonizingly close afterwards, losing in playoffs in each of the next three seasons – would be Canada’s last until Brooke Henderson at the Cambia Portland Classic, a full 14 years later.

“The first one,’’ Kane reflects, “was the important one but I’d be lying to say it’s the one that stands out. I vividly remember the chances that came before, and being so close without winning, deep-down wondering if I was ever going to be able to get … there. You always remember the struggles, right?”

“I love hockey. Absolutely love it. And I remember Mark Messier saying: ‘Winning is an attitude.’ I ran with that for a full week (at the Michelob). I said to myself: ‘I’m responsible for that. I’m responsible for my attitude.’ And it pushed me over the line. That win in St. Louis opened up such great opportunities.”

Sandra Post was, of course, the first Canadian to play on the LPGA Tour. Also the first to win multiple times in a season, and the last before Lorie Kane.

“It all starts with winning,’’ reminds Post. “If you don’t win, you don’t get the chance for the nice stuff. (For Hall consideration) you have to win nationally but you also to win internationally. You go from there. You can say all the other great things about Lorie, and there are so many – but the attention that comes with winning is what puts it all in motion. You can’t do all the great outside things Lorie has done for golf unless you’ve got a pretty good game. And she has that.”

More than the achievements, though, what Kane will be celebrating on induction day are the people who’ve aided one of the great careers in Canadian golf. The late Jack McLaughlin. Hunter Harrison. Bourassa. Danny Sharp, caddy for virtually her entire pro career. The mentors, the colleagues, the champions, and most importantly the friends and family who supporter her along the way.

“Any time you stand up in front of your peers and 1) have to make sure you don’t forget anybody and 2) celebrate this with the people who’ve made an impact in your life,’’ is the frank admission, “well, it can be a little nerve wracking.”

Small smile. “But nothing I can’t handle.”

She’s handled it all so well, from Charlottetown to Glen Abbey, to Oakville, Ont., and the Hall of Fame.

“Nobody,’’ Lorie Kane repeats emphatically, “is bigger than the game. I hope what I’ve brought to it is a smile, hard work, sharing. Coming from our smallest province, I had five golf courses to play on when I was starting. Now there’s 29. Golf is important to Prince Edward Island, the Atlantic provinces and the country as a whole.”

“If my success has in any small way helped that growth, any growth, that’s nothing more than my job, giving back what I took from the game. I’m just so, so thankful to golf.”

Whether the lady is up to admitting so or not, the feeling is entirely mutual.