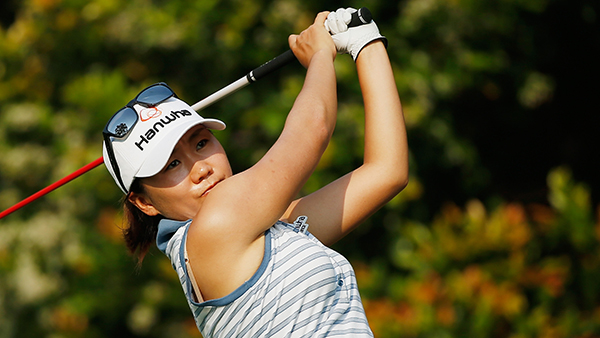 KAPOLEI, Hawaii – I.K. Kim started last and finished first Wednesday in the first round of the Lotte Championship.

Kim birdied her final three holes and four of the last five for a 7-under 65 and a two-stroke lead.

Playing in the last group of the day off the 10th tee, Kim had eight birdies and one bogey in wind gusting to 25 mph at Ko Olina Golf Club. The South Korean player won the last of her three LPGA Tour titles in 2010.

“I hit a really good putt at No. 7 and at No. 8 I hit an 8-iron downwind that stayed on top of the green so I was able to look at a makeable putt,” she said. “At the ninth, it was getting really dark. It was dinnertime really. There were just the three of us out there.”

From 190 yards, she aimed 20 feet right and hit her 5-wood into the wind. The ball stopped 12 feet from the hole. She could see well enough to make the putt and shoot the same score she had in the final round two years ago en route to a fourth-place t

“Birdie on the three finishing holes is why 65 was possible,” Kim said. “I didn’t think it was possible when I started today.”

Choi had four birdies on her second nine to take the lead in the morning wave. Park birdied four of her last six to catch her, slam-dunking a 45-foot putt on the final hole.

“I judged the wind great and holed a lot of good putts,” Park said. “Especially the last putt. I can’t remember how long it’s been since I holed that long a putt.”

Hawaii’s Michelle Wie, the defending champion, got to 3 under on the 15th, but bogeyed the next hole and finished at 70. Wie hit the flag with her approach shot on the final hole, but left her 8-foot birdie putt short.

“Some of the putts you kind of have to play for the wind as well, too,” said Wie, who needed 31 putts with a chip-in. “It’s not like it’s a constant, so you have to wait for the right moment for the wind to blow or not blow. It gets tricky out there. You’ve just got to stay patient and try to hit solid putts and take whatever comes at you.”

Four Canadians were in the field with Sue Kim of Langley, B.C. leading the way at T24 following a round of 71. Alena Sharp sits T51 after opening at one-over 73. Jennifer Kirby finished the day at 74 while Rebecca Lee-Bentham carded a 76.