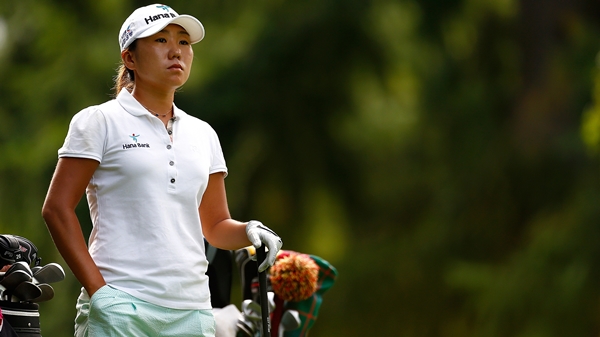 PORTLAND, Ore. – I.K. Kim increased her lead to three strokes Friday in the LPGA Tour’s Portland Classic, shooting a 5-under 67 to reach 12 under.

The South Korean player had seven birdies and two bogeys in her morning round in cloudy, calm conditions at Columbia Edgewater. She won the last of her three LPGA Tour titles in 2010, and had a victory this summer in a Ladies European Tour event in England.

“I’m really pleased how I played the last two days,” Kim said. “There is a lot of scores out there, so I think it will be a good week for all of us.”

Kim’s best LPGA Tour finish this year is a tie for 13th in the Swinging Skirts LPGA Classic in April in California.

“I’m glad that I’ve been kind of going through all these things, and you know, it’s nice to win one,” Kim said.

Spain’s Carlota Ciganda and South Korea’s Mi Jung Hur shot 65 to join Laura Diaz at 9 under. Diaz had a 68.

“Like a month ago I was practicing with him. I can’t speak. He’s the one who taught me everything. I’m here because of him. He means everything to me,” Ciganda said. “I’m just going to play for him, and I would love to win just for him.”

South Korea’s So Yeon Ryu, the Canadian Pacific Women’s Open winner Sunday in London, Ont., was 8 under along with Mina Harigae, China’s Xi Yu Lin and South Africa’s Paula Reto. The fifth-ranked Ryu had a 66, Lin carded a 68, and Harigae and Reto shot 69.

Defending champion Suzann Pettersen was 6 under after a 67. She played her fnal nine hoiles in 5-under 41.

“I haven’t played my best the last two days. Really happy to be able to shoot 5 under on the back nine,” Pettersen said. “I don’t know if it’s just the fourth (consecutive) week that I’m tired, but grinding it out. I’m finding solutions out there.”

Juli Inkster and Sweden’s Anna Nordqvist also were in the group at 6 under. The 54-year-old Inkster, making her 28th appearance in the event, followed her opening 68 with a 70. Nordqvist, a two-time winner this year, also shot 70.

South Korea’s Jeong Jang was 3 under after a 71. The 34-year-old Jang, the 2005 Women’s British Open champion, announced her retirement this week and said the event will be her last.

Hee-Won Han, also playing her final event, had a 71 to make the cut on the number at 1 over. The 34-year-old South Korean player won the 2004 event and has six LPGA Tour victories.

Han and Jang are considered to be pioneers of the South Korean LPGA movement.

“My kids are growing up, and I thought it was perfect timing for retire. Be a mom,” Han said.

Gigi Stoll, a senior at Beaverton High School who won the Portland Classic Amateur Open last week to earn a spot in the field, had a 74 to make the cut at 1 over.

Charley Hull, the 18-year-old English player who got into the event on a sponsor exemption, missed the cut by a stroke with rounds of 70 and 76.

Paris, Ont,’s Jennifer Kirby leads the Canadians into the weekend. She’s sitting at 2-under 142 and is tied for 39th heading into weekend action.

Top-ranked Stacy Lewis, No. 2 Inbee Park and No. 3 Lydia Ko are skipping the tournament, giving them a two-week break before the Evian Championship in France.